Initials in diamonds are presented for distinguished merit to court ladies. This decoration is worn upon the left shoulder, suspended by the blue commander ribbon of the Guelphic Order, and consists of the letters : "E. A. F. R." (Ernest Augustus Frederica, Reges). (No. 17). 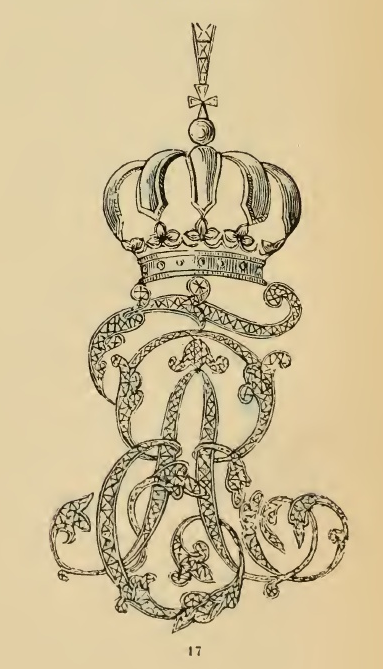 The Ernest Augustus Cross, was founded by King Ernest Augustus on the 9th August, 1845, and was made to form the first class of the above William Cross ; it is designated - by the words of the warrant - as "a reward to officers for long faithful service, while it promises, at the same time, a better prospect for future promotion than do the William Cross and Medal". It consists of a golden cross, the front of which shows in monogram the initials : "E. A. R." beneath a crown, and the reverse, the number "50". It is worn (without a buckle) on the left breast, suspended by a dark red ribbon with dark blue borders. Only Hanoverian troops of fifty years' active service may claim its possession.

The Medal of Merit for saving from Dangery was founded on the same day with the previous, as a reward for those who have saved, or been the means of saving, the life or property of others at the risk of their own hves. It is of silver, and shows on the obverse the effigy and the name of the King as legend, and on the reverse an oaken wreath, with the inscription : "Für Rettung und Gefahr" (For saving and danger), while round the edge is engraved the name of the recipient.

It is worn on the left breast, suspended by an orange coloured ribbon with bright blue stripes.