DECORATIONS : HANOVER - THE WAR MEDAL FOR THE VOLUNTEERS INE THE BRITISH-GERMAN LEGION

War Medal for the Volunteers in the British-German Legion, until the conclusion of the Peace at Paris, in 1814.

The foundation of this medal is coeval with the previous, and was also cast from the captured guns. The front shows a cross beneath a royal crown, with the initials : "E. A. R." within its wings, while the reverse contains the words : "Koniglich Deutsche Legion" (Royal German Legion) in the circle, and "Tapfer und Treu" (Brave and loyal) in the centre, and the whole is surrounded by a laurel wreath. (No. 13). Like the former, it is worn suspended by a white ribbon with two yellow stripes, by the military on the left breast, and by civilians at the button-hole. It is conferred on military men of all degrees and all nations (including military surgeons), who had entered that legion before the conclusion of peace in 1814, and stood before the enemy in some of the years from 1803 to 1814. 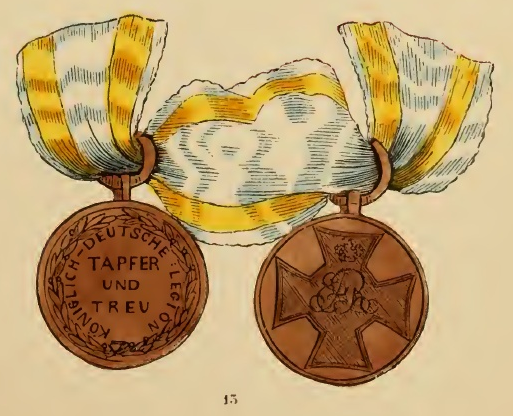