DECORATIONS : HOLLAND - THE CIVIL ORDER OF MERIT OF THE BELGIAN LION

(Also called the Order of the Netherlands Lion)

This Order was also founded by King William J. on the 20th September, 1815, for distinguished merit in civil life, patriotism, or eminence in the arts and sciences ; foreigners are not excluded from it.

The monarch holds the Grand Mastership, a dignity inseparable from the Dutch crown.

The Order is divided into three classes : Knights of the Grand Cross, Commanders, and simple Knights. There is also a fourth class, under the name "Brothers", for individuals who have merited well, by useful and humane actions towards their fellow-creatures.

The badge is a white enamelled cross, with a gold letter "W" in each of the angles : the blue enamelled middle of the front contains the inscription in gold, of "Virtus nobilitat" (Virtue ennobles), and the similar middle of the reverse shows the lion of the national arms (No. 8). Above the whole is a roval crown. The colour of the ribbon is Nassau blue with two orange coloured stripes.

The distinctive marks of the different classes are :
1. For the Knights Grand Cross, the decoration of the front mounted on a silver star without the crown, and embroidered upon the left side of the coat (No. 6) while the jewel of the Order (No. 8) is worn across the right shoulder towards the left hip, by a ribbon about three and a half inches wide. 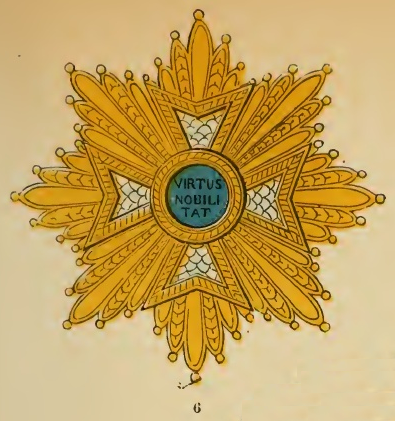 2. For the Commanders, the same decoration embroidered upon the coat without the star, but with the crown above it (No. 7). The jewel is worn round the neck by a ribbon about two inches and a half wide. 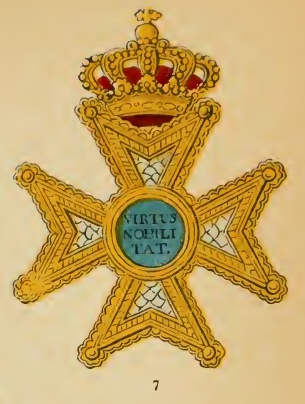 3. For the simple Knights, the decoration is worn at the button-hole, suspended by a ribbon about two inches and a half wide.

The "Brothers" wear a silver medal instead of the cross; the front shows the symbol, and the reverse, the motto of the Order. It is worn suspended by a blue ribbon, about one inch and a half wide, with an orange stripe in the middle (No. 9). 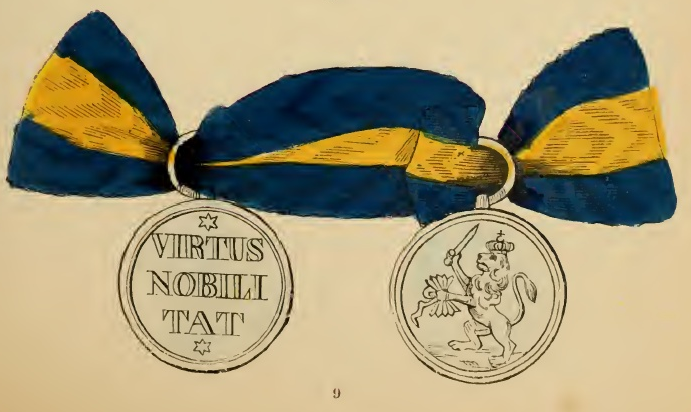 The "Brothers" receive an annual pension of 200 fl. (about £17), the half of which goes, after death, to their widows.