Was founded by Duke Charles Louis on the 1st June, 1833, under the name : "Ordine di San Giorgio per il Merito Militare (Order of St. George for Military Merit).

The reigning Duke is Grand Master of the Order, which is divided into three classes, the nomination beginning with the lowest, and advancing gradually to the second and third.

The badge is a cross (No. 1) ; the middle of the obverse shows the figure of St. George and the Dragon, surrounded by a green enamelled ring with the inscription: "Al Merito Militare" (To military merit), and that of the reverse, the initial of the founder together with the year "1833".

The cross for the first class Knights is of gold and enamel, for the second, of silver and enamel, and for the third, of silver without enamel. It is worn by all the classes on the left side of the breast suspended by a red ribbon with white borders, while that of the first class is, in addition, adorned with a rosette. The reigning Duke wears the cross of the first class, accompanied by a star, the middle of which has the same device as that of the front of the cross, with the addition of the year of the foundation as inscribed on the reverse. For extraordinary merit, the cross of the first two classes is adorned with brilliants, (No. 2), or is accompanied by a pension. 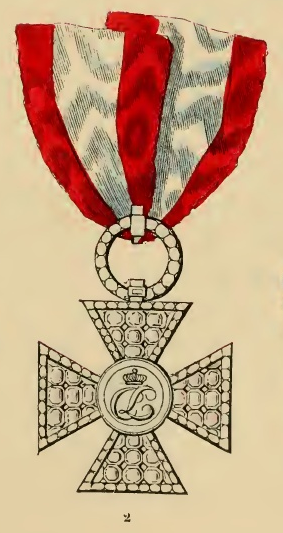