Arms. The coat of arms adopted by His Highness's family is most interesting, as illustrating Oriental heraldry. The sketch given in the margin is taken from a document kindly supplied by the Kutch Darbar, and was described by His Excellency the Diwan of Kutch in 1876 in the following words :

"(1) The Fort of Bhujia, which overlooks the capital of Bhuj. (2) The Moon, showing that the reigning family belongs to the Lunar dynasty. (3) The Crown, and the Jari Patka flag (with representations of the sun and the moon), emblematic of royalty. (4) The Mahi Muratab, a flag with a gold-fish at the top, presented to a former Rao of Kutch by an Emperor of Delhi. This is considered a valued present, and is carried in State in all ceremonials by sowaris on the back of an elephant. (5) The Trident of the family goddess, and old weapons of the family. (6) A Boat, showing that Kutch is a maritime Power. (7) Two Horsemen, representing Kutch as a horse-producing country, and showing specimens of her military retainers. (8) A Cow, representing the customary title of a native potentate. (9) A killed Tiger, indicating the great historical event from which the title of Rao was derived. (10)

The Motto adopted by the family, showing the attributes by which the first Rao Khengar succeeded in regaining his lost patrimony." 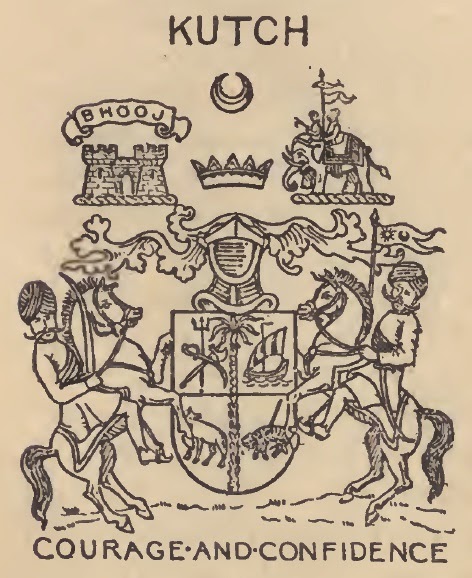 Source : The golden book of India, a genealogical and biographical dictionary of the ruling princes, chiefs, nobles, and other personages, titled or decorated, of the Indian empire, by Lethbridge, Roper, Published 1893.
Publié par BBM à 10:30 AM