DECORATIONS : BAVARIA - THE FEMALE ORDER OF THE ST. ANN INSTITUTION AT WURZBURG

By the will of the Countess Anne Maria of Dernbach, bom Baroness Voit of Rieneck, in 1683, her estates were, in case her Consort should die without issue, to be applied to the foundation of an establishment for unmarried ladies of the Franconian nobility. It happened, that Count Dernbach died 1714, without direct heirs, and the Prince Bishop of Wurzburg, John Philip, therefore acted up to this disposition in the Countess's will. He founded the establishment, and fixed the number of the members at six, including the Abbess. They were bound to live under one roof, while the indispensable conditions of their admissibility were, the Catholic religion, descent of sixteen noble generations, i.e. eight on each of the parent's sides (the Franconian race in preference), and an age varying from twelve to sixteen years.

Adoration of God, celebration of the memory of the founder, and education in all noble virtues and spiritual sciences, were the objects of the establishment. The Prince Bishop Frederick Charles confirmed these statutes 1793, while a considerable donation made in 1756 by Count Ostein, permitted an increase of the members to seven, including the Abbess.

When, at the beginning of the present century, the ancient relations of the German empire ceased to exist, and the principality of Wurzburg, like many other petty states, lost its independance, and became incorporated with Bavaria, the Elector Max-Joseph IV. abolished this institution, (4th April, 1803) but united it, after a few months, with the one at Munich, allowing from its revenues the pensions of twelve members, four at 800 fl. (£80), for native nobility, and eight at 400 fl. (£40), for state functionaries.

The peace of Pressburg (26th December, 1805), having restored the independance of Wurzburg by creating it a Grand-Duchy, its Sovereign, Prince Ferdinand Archduke of Austria, re-established the institution at Wurzburg by a convention with Bavaria (29th April, 1807), and gave it in 1811 new statutes.

In 1814, though Wurzburg fell again to the share of Bavaria, the institution retained its independance, nor were its statutes materially altered, except that the number and title of the members were in so far modified, that instead of four members (as fixed in 1811), the number was now fixed at an uncertain number of honorary ladies, twelve noble ladies with pensions of 800 florins each, and twenty non-noble ladies with pensions of 400 florins each. These pensions were granted until their marriage, and if married with royal consent, one year's pension was allowed by way of dower.

The badge (No. 20) is a gold Cross, white enamelled, and its broad sides rounded. The obverse represents in gold upon white enamelled ground St. Ann, and upon the points are distributed the words : "In ihren edlen Tochtern" (In her noble daughters), while the reverse bears the crest of the founder. It is worn upon the black dress suspended by a red ribbon with silver borders. 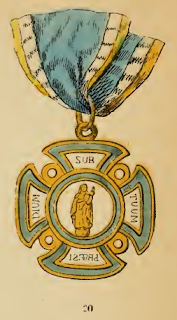