DECORATIONS : BAVARIA - THE ORDER OF THERESA

To grant to a certain number of unmarried noble ladies, a distinction of honour, as also a pension by which their income may be increased, so says the introductory part of the Patent.

Theresa, late Queen of Bavaria, founded (12th December, 1827) the above Order, endowing it, from her own private property, with a revenue sufficient to allow an annual pension to twelve members, six of whom at 300 fl. (£30), and the other six at 100 fl. (£10). The reigning Queen (even as a widow) is always to be Grand Mistress of the Order, or by her choice, and by consent of the King, some Princess of the royal house.

The pretension - as in the previous one - to the Order, is nobility of ancient Bavarian descent, and an age above ten years. The candidates must also show that their own private income does not exceed annually the sum of 300 fl. All Christian sects are admissible. The pension ceases with marriage ; but if suitably married according to their rank, they are allowed to wear the insignia in future as "honorary ladies", though the pension is discontinued.

The badge (No. 23, front, and No. 24, reverse) is a Cross, worn by a bow of a white-watered ribbon with two sky-blue stripes, fastened to the left breast, and on gala days when at Court, a similar broad ribbon is thrown across the right shoulder towards the left hip. The costume is a dress of bright blue silk. 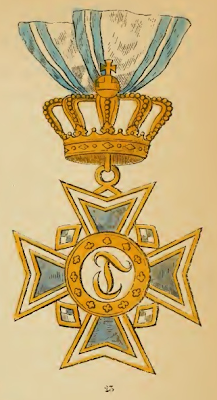 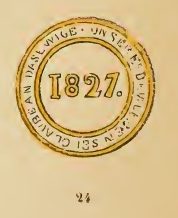