The first Consort of the Elector Charles Theodor of the Palatinate, Elizabeth Augusta, daughter of the Palatine Joseph Charles Emanuel of Schulzbach, founded this Order for ladies in honour of her sainted patroness and namesake, on the 18th October, 1766, as a purely charitable institution for the poor.

It was confirmed on the 31st January, 1767, by Pope Clement XIII. and endowed with various indulgencies. The Catholic religion and the Seize Quartiers - the proof of noble descent running through sixteen generations of their own or their husband's ancestors - are indispensable conditions for candidates.

The Grand Mistress is, however, empowered to nominate an unlimited number of ladies, from princely houses and her own court, as also six other married or widowed ladies of noble, though not ancient, descent. The nomination takes place either on Easter, or on St. Elizabeth's day (19th November). The entrance fee is four ducats. The badge (Nos. 25 and 26) is a white enamelled Cross, representing on one side St. Elizabeth dispensing charity to the poor, and on the other the initial of the founder. It is worn on the left breast by a blue ribbon with red borders. No member can appear in public without it, except by fine of one ducat. The King appoints the Grand Mistress ; the present one is the Duchess of Leuchtenberg. 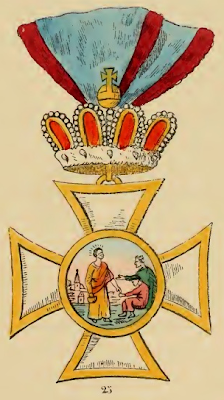 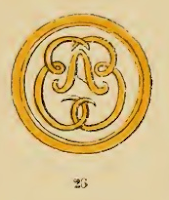