This order was founded on the 23rd April, 1839, as the "Order of the House of Hanover". The statutes appoint the Kings of Hanover Grand Masters, and allow of only one class, called the Knights of St. George.

The sons and brothers of the King are Knights by birth, while the Princes of the royal family have a claim to it. The number of native members is fixed (exclusive of the royal Princes) at sixteen, which cannot be exceeded without some special grounds. With the exception of Dukes and Princes, no member can be admitted before the completion of his thirtieth year of age.

Only noblemen of unblemished reputation are eligible, and those who are already in possession of the Grand Cross of the Guelphic Order.

The badge is an octagonal dark blue enamelled cross, the centre of the obverse representing St. George with lance and dragon, and the reverse the initial of the King. This cross (No. 11) is worn across the right shoulder by a dark red watered ribbon, about four and a quarter inches wide. 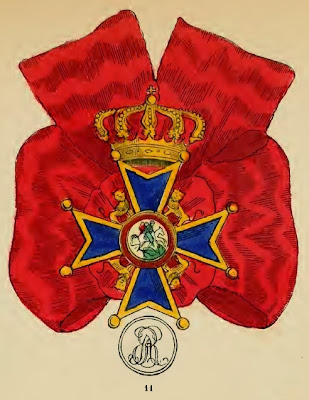 Close to it is fastened, on the left breast, a star embroidered in silver. The centre of the star contains likewise St. George on horseback, and the motto : "Nunquam retrorsum" (Never backward) (No. 10.). 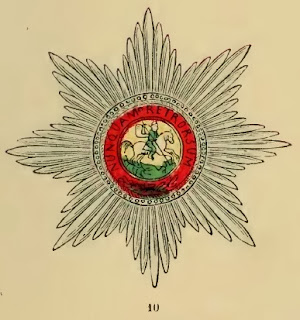 The Knights wear besides, the Cross of the Guelphic Order round the neck, saltire-ways. The members must possess the rank of at least Lieutenant-general ; they are allowed to join the insignia to their family crest on seals or otherwise.