It was the first constitutional Order, founded by King William, on the 30th April, 1815, and consists of four classes : Knights Grand Cross, Commanders, Knights of the third and fourth classes.

The badge is an octagonal white onamelled cross, with eight knobs, on the points, and with the words distributed upon the wings : "Voor Moed, Belied, Trouw" (For courage, zeal, and loyalty), while between those wings is the white enamelled Burgundian Cross, and upon the middle of the obverse, the Burgundian Fire-steel, in gold, and on the reverse, in a blue medal, a "W" surrounded by a laurel wreath.

The characteristic distinctions for the four classes are :
a. For the Knights of the Grand Cross, an embroidered silver star (No. 1) upon the left side of the coat, and the jewel (No. 3), worn across the right shoulder towards the left hip, by a ribbon about three and a half inches wide. 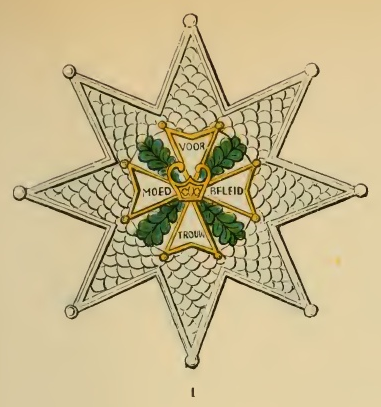 b. For the Commanders, the Cross (No. 2), embroidered upon the left side of the coat, and a similar one worn round the neck, by a ribbon about two and a half inches wide. 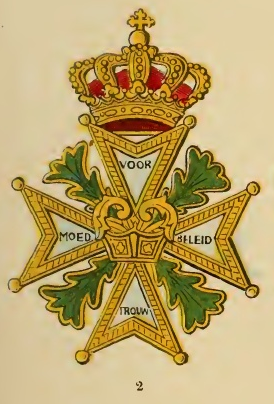 c. For the Knights third class, the jewel (No. 3), worn at the button-hole by a ribbon, about one inch and a half wide.

d. For the Knights' fourth class, the decoration is of a smaller size in silver, and is suspended, also, at the button-hole, by a ribbon about three quarters of an inch wide.

The Knights in the army and navy, below the rank of officers, receive with the first class Order, an addition equal to the half of their pay, which is doubled when promoted to the third class. The scale of the degrees is from the fourth class upwards, so that no intervening class can be passed over.

The festival of the Order is annually held on the 16th January.