1. The Cross of Honour, was founded on the 1st January, 1842, conjointly by the two Princes (Frederick and Charles), of the above Principalities. They divided it into four classes :

The badge consists : for the first class, of an octagonal gold cross with black edges, and coated with white enamel. The middle of the cross is white enamelled, and contains the letters in monogram : "F. and C." the initials of the founders.

The blue enamelled ring round the middle contains, in golden characters, the legend : "Für Treue und Verdienst" (For loyalty and merit), and is surrounded by a laurel wreath. The reverse shows, on a similar centre, the arms of Hohenzollern. Above the cross is seen the crown in gold. For the second class, of the same cross, but without the crown. For the third and fourth classes, of the medals containing the same impression as does the cross, with the only difference that the gold medal of the third class has, in addition, a gold crown above it.

The insignia of all the four classes are worn at the buttonhole of the left breast, suspended by a white ribbon with black borders. The owners of the first three classes are allowed, on ordinary occasions, to wear the ribbon without the
decoration.

All the Princes of the Hohenzollern House are born Knights of the Cross of Honour, but are not allowed to wear it before the completion of the fifteenth year of their age. The first class Cross is only presented to the higher State and Court functionaries for distinguished merit. With the second class Cross are honoured, civil officers who possess the rank of Collegiate, Counsellor, or Head-bailiff, while military men must possess, at least, the rank of Captain. The first class is limited (for each Principality) to four, and the second to six members. The decorations of the third and fourth class are bestowed indiscriminately, on all individuals who have merited well of their country in promotion of the arts, sciences, inventions, useful establishments, etc. The number of foreign members is not strictly limited in some particular instances. 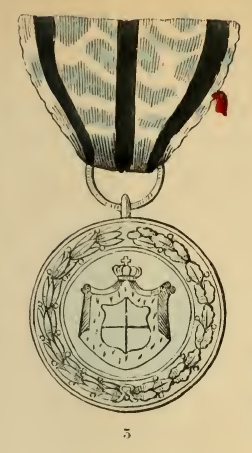 On the 8th April, 1844, another class was added to the former, a sort of an intervening class between the Cross of Honour, second class, and the Golden Medal of Honour. The new class which was then made to form the third, was that of the Silver Cross of Honour, and its members were limited (for each Principality) to eight.


2. Military Decoration, was founded on the 25th February, 1841. It consists of a small golden cross (Nos. 4 and 5), and is worn on the left breast by a black ribbon with white borders.

The centre of the obverse contains the crest of the princely house, and the reverse shows the number "XXV", alluding to the distinction, which can only be obtained after twenty-five years' active service, the years of war counting double. 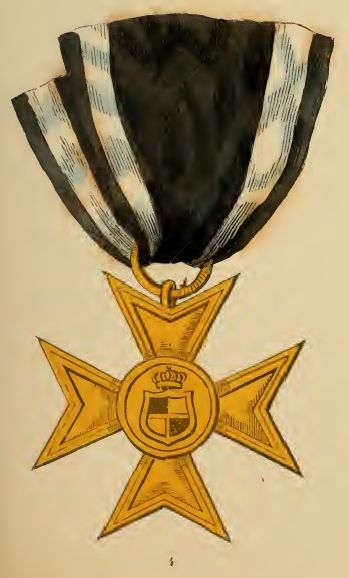 After the incorporation of the two Principalities with Prussia in 1850, the Order was received amongst the Prussian Orders, under the name : "Order of the House Hohenzollern". The statutes underwent modifications in several points, and the Order now consists of only three classes : Cross of Honour, first, second, and third class, to which are added a Golden Medal of Honour, and a Silver Medal of Merit. 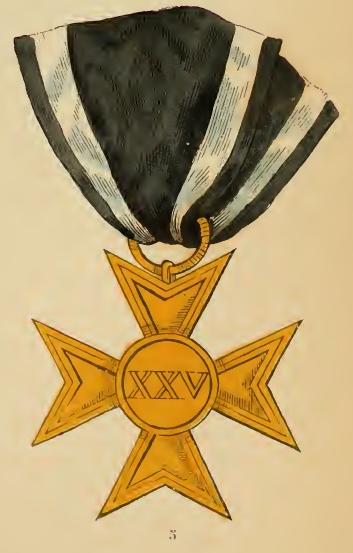 1. The Cross of Honour, first class, is a gold octagonal cross, white enamelled, with black edges. In the middle of the cross is a white enamelled field, showing the family crest of the HohenzoUern, quartered white and black, and covered with a crown. Round this field, and within a ring upon blue enamelled ground, is the legend : "Für Treue und Verdienst". Between the angles of the Cross are green enamelled wreaths, partly of laurel, and partly of oaken branches, the leaves being adorned with gold edges.
2. The Cross of Honour, second class, consists of the same Cross, but of a smaller size. The white enamelled middle of the reverse contains the crowned initials, "F. and C." in gold. The ring round it shows in gold, upon blue ground, the day of the foundation of the Order (5th December, 1841).
3. The Cross of Honour, third class, is of silver ; the arms of the cross are pointed, while the reverse shows the date of the foundation (8th December, 1844). In all other respects, it resembles the Cross of the second class.
4 and 5. The Golden Medal of Honour, and The Silver Medal of Merit, have the same impression, both on front and reverse, as have the medal and ring of Cross second class.

The Cross of the first class is worn on the left breast; and that of the second and third, as also the two medals at the button-hole, suspended by a white watered ribbon with three black stripes, and about one and a half inches wide. The first class Cross is usually worn by the Prussian Knights of the Black Eagle below the star of that Order.

The Princes of the blood royal have the option of wearing either the first or the second class Cross. In the latter case, the Cross is covered with a crown, consisting of a golden circle, mounted by five leaves and four coronets, above which are joined three rings set with pearls, holding the imperial globe. Between the rings is a red velvet hat, which partially covers the crown.