DECORATIONS : BRAZIL - THE ORDER OF PEDRO

Don Pedro I. established this Order, named from himself, soon after he assumed the title of Emperor of Brazil. It is the highest in the empire, has only one class, and was only presented to reigning sovereigns.

Beneath an imperial gold crown is seen a radiating golden pentagonal star, upon which rests another pentagonal star, white enamelled with gold edges, and with gold little balls at each corner. The blue enamelled broad ring has two narrow gold edges, with the legend: "Fundator del Imperio dal Brazil" (Founder of the Brazilian empire), while the white enamelled centre of the star shows a gold Phoenix bearing within its silver face the letters P. I. (Pedro I.), and in its claws an antique crown. This Order is worn by a broad green watered ribbon with white borders, across the right shoulder towards the left hip (No. 2). 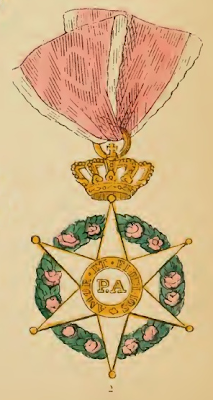 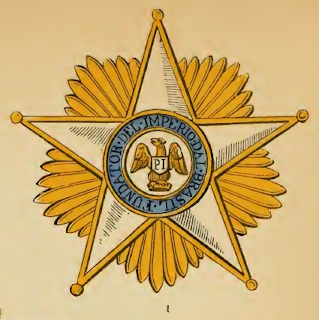