DECORATIONS : BRAZIL - THE ORDER OF THE CROSS OF THE SOUTH

This Order, which is divided into four classes, Knights of the Grand Cross, Dignitaries, Officers, and Knights, was also founded by Don Pedro I. on the 1st December, 1822, instituting the reigning Emperor as Grand Master. The decoration (No. 4) is a pentagonal white enamelled Cross, resting upon a green laurel wreath with broad edges mounted in gold, and the ten points of which bear little gold balls.

A pentagonal radiating star of gold below an imperial golden crown, the middle face of which contains the same as the reverse of the Cross, distinguishes the owners of the three higher classes, and is worn by them upon the left breast (No. 3). 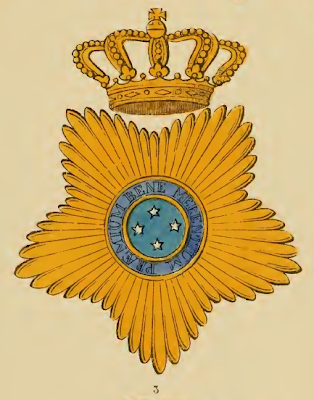 The particular characteristic of the Order is, that Princesses, Duchesses, and other high born ladies, are not excluded from it.