In the earlier part of the 12th century, about the time when, in the East, the Knights of various countries began, after the model of the monks, to form themselves into different Orders, for the purpose of vanquishing the infidels, and protecting and supporting, with all the energy and enthusiasm inspired by vows of chastity, poverty and obedience, the numerous pilgrims on their way to the Holy Sepulchre ; a pious German, whose name is now lost, built at Jerusalem a hospital for the pilgrims of his native country — the then existing Orders of the Templars and of St. John, having thought fit to devote their care exclusively to the comforts of the French and Italian pilgrims. This hospital soon counted for its patrons several wealthy merchants and Knights, and being consecrated by the Patriarch, a chapel was joined to it, devoted to the Blessed Virgin ; it soon became an important asylum for German warriors, especially in 1189 at the siege of Acre, when the founder, assisted by contributions from German merchants at Liibeck and Hamburg, took care of the sick and wounded soldiers, who lay in tents before that place.

In 1191, Frederick of Suabia, on his arrival, after the death of Frederick of Barbarossa, with the rest of his army before Acre, deemed it advisable to secure to the institution a more solid basis. He gave it a constitution, and prescribed to the Knights and merchants assembled, regulations, the general outlines of which he formed after those of the Order of St. Augustine, while the rules and laws concerning the sick and poor he borrowed from the Knights of St. John, and those relative to war and peace from the Templars. He conceded to it all the rights and privileges peculiar to these Corporations or Colleges, and gave it, under sanction of Pope Coelestin III the name of: "the Order of the German House of the Holy Virgin at Jerusalem" choosing for the insignia, a black cross with white mountings, worn upon a white cloak.

By the provisions of the original statutes, only native Germans of blameless character and nobility were admissible. The members were, moreover, to be unmarried and to remain single the whole of their lives; they were also to give up to the Order all their private property, and to devote themselves exclusively to the service of God, the sick and the poor, and to the defence of the Holy Land. Their food was originally bread and water, and their couch only a sack of straw, all of which, together with their garment, were regularly distributed amongst them by the Grand Master.

After a long series of eventful vicissitudes, the Order attained its culminating point, and assumed at the same time quite a different character under the Grand Master Herman of Salza, who well knew how to turn to account the disputes between Pope Honorius III and the Emperor Frederick, as also the warlike events in the provinces which now form a part of Eastern Prussia.

The Duke Conrad of Masovia and Cujavia, having, in his religious zeal, attempted to force Christianity upon his pagan neighbours the Prussians, was met with such an obstinate resistance from them, that he was in his turn threatened with an invasion of his own dominions. In this dilemma he called to his assistance, in 1226, the Teutonic or German Knights, offering them in return for their service, the concession of important rights and privileges ; while the Pope and the Emperor granted them the possession of all the lands they might conquer from the heathens during the war. Herman had just returned from his third Crusade to Palestine, and settled at Venice after the loss of Acre, the head-quarters of his Order. He so adroitly managed the opening crusade against the heathen Prussians, that thousands from all lands and countries rallied under his flag, by which the Order received an immense increase in members and property, from Germany, Italy, Sicily and Hungary. The war was successfully carried on under his General, Balk, who within a few years built the towns of Pulen, Thorn, Marienwerder, Elbing, and others. The Order soon possessed large districts of land on the Baltic Sea, governed by a Land Master, while the Grand Master fixed his residence at Marburg in Hessia.

During these complicated but fortunate events, the Order had assumed a new form and character. Instead of the original names of "Brothers" and "Hospitalers", the Knights were now called Masters, and, indeed, acted as such in the strictest sense of the term. They became imperious, tyrannical, despotic, and led a voluptuous and luxurious life at the expense of their Prussian subjects, who figured as the most wretched, oppressed, and miserable creatures in Europe. Nowhere in Europe was bondage carried to such a cruel extent as under the rule of these German Knights, who vs^ere intoxicated by war, and plunged in sensual enjoyments. Hence the continued insurrections, devastations of towns and lands, complaints, treaties, and difficulties; hence the despised decrees of the Pope and the Emperor, the incessant disputes with the clergy and bishops of rank, and the subversion of the rules, statutes and laws of the original Constitution, which form the greatest portion of the history of the Order, and which finally resulted in prostration and an exhaustion of its strength and powder, especially after the terrible battle near Tannenberg against the Poles and Lithuanians, (15th July, 1410), in which the Grand Master, Ulrich of Jungingen, and thirty thousand of his followers, lost their lives.

In 1440, the towns of Dantzig, Elbing, Thorn, and the nobility of several adjoining provinces concluded a formal treaty amongst themselves against these ruthless masters, while in 1454 the whole of Western Prussia, headed by King Casimir IV, rose against them, and after a war of twelve years, which cost above three hundred thousand human lives, the Order was obliged to sign a treaty which left it in possession of only half of Prussia, and placed it under the supreme authority of Poland. But having repeatedly violated this treaty, the Order was virtually abolished by the peace of Cracow (1525), the whole of its landed property having been granted as a fief of Poland to the then Grand Master, Albert, Margrave of Brandenburg.

Thenceforth its chief resided at Mergentheim in Franconia, under the title of Administrator in Prussia, Grand Master of the Teutonic Order in Germany and Italy, and Spiritual Prince of the Empire and member of the Franconian district, while his possessions consisted of Mergentheim, with fifteen thousand German square miles, and thirty-two thousand inhabitants, partly Catholics and partly Protestants.

By the peace of Luneville, (9th February, 1801), the Order lost the bailiwicks, Coblentz, Altenbriesen, and Bourgogne, and though it received in return the abbeys and cloisters of Austrian Voralberg, and the diocese of Augsburg and Constance, the peace of Presburg (1805) invested the Emperor of Austria with all the rights, dignity, and revenues appertaining to its Grand Master.

In 1809, Napoleon entirely abolished the Order in the Rhenish provinces, and the different European princes appropriated to themselves the possessions belonging to their respective territories, a spoliation to which Austria was compelled to consent in the ensuing treaty of peace. At the Congress of Vienna, the Chapter House at Francfort-on-the-Maine, together with the domains, revenues, and privileges attached to it, were returned to the Order then existing in Austria and Prussian Silesia.

It having thus conae under the protection of Austria, the statutes were modified in accordance with its new relations, and by an Imperial decree of the 28th June, 1840, it is provided, that :

1. The German Order is to exist in Austria as an independant spiritual and knightly Order, but shall be considered and treated at the same time as a direct fief of the Austrian Crown.
2. The Emperors of Austria are always to be considered as its patrons and protectors.
3. The rights and duties relating to the administration of its possessions, are to be the same as those of any private property in Austria according to the laws of the land.
4. The Order and its relations are not to be subject to the inspection of the civil authorities, except in special cases wherehis Imperial Majesty should think proper to require from it an account of its financial position and internal regulations.
5. The property of the Order, whether moveable or not, is not to be mortgaged or disposed of, without the special consent of the sovereign.
6. As regards taxes and other state, and provincial, burdens, its possessions are to be considered as secular property in every respect.
7. Its head is to bear the title of "Grand Master of the Teutonic Order".
8. At every accession of a new Emperor, or appointment of new Grand Masters, the latter are bound to petition for, and receive solemnly a renewal of the fief. They are considered and treated as Spiritual Vassal Princes of Austria, and enjoy the rank and rights of the most ancient Order of the realm above all the Secular and Spiritual Princes whose dignity dates subsequent to the foundation of the Teutonic Order.
9. Though by their vows, monks, the Knights may remain in the enjoyment and free disposal of their private property, except in gifts amounting to more than 300 ducats, when the consent of the head must first be obtained.
10. No member is to be security or guardian for other persons, without special dispensation from the head.
11. Wills and legacies by the members must bear the sanction of the head, without which they are void.
12. If the head or a member should die intestate, his personal property falls to the Order, without its being obliged to pay his debts.
13. Only in matters strictly belonging to the Order, the members are to be under the jurisdiction of its legitimate authorities, while in every other respect they stand under the civil authorities of their local districts or provinces.

The insignia (No. 20) are worn round the neck, or (No. 19) as a cross, with silver embroidery, upon the breast. On solemn occasions, the Knights wear a white mantle decorated with a similar, or even larger cross. 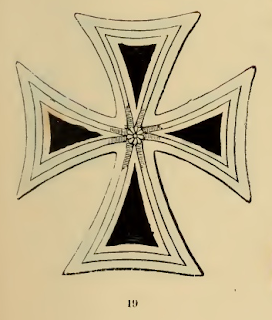 Source : the book of orders of knighthood and decorations of honour of all nations, sir Bernard BURKE, 1858
Publié par BBM à 7:14 PM