DECORATIONS : GREAT-BRITAIN - THE MOST ILLUSTRIOUS ORDER OF SAINT PATRICK

King George III. wishing to manifest his regard for Ireland by assigning to that kingdom a National Order, was induced to institute, on the 5th February 1783, a Fraternity of Knights formed on the model of "The Garter" and named after the tutelar Saint, St. Patrick. His Majesty was further pleased to assign as insignia the emblems of the country to which the Order was to belong, and gave for "Motto" the words "Quis Separabit MDCCLXXIII," to inculcate that harmony and union which the Royal Founder was anxious to foster throughout his dominions. Thus orignated

The Knights of St. Patrick, a brilliant succession of distinguished men, selected from the most eminent, for birth, rank, or personal achievement, amongst the Irish Peers. At the present time, the Order consists of The Sovereign, the Grand Master, twenty-two Knights, and several Officers.

By the original statutes, George III. his heirs and successors, Kings of Great Britain were declared to be the Sovereign, and the Lord Lieutenant General and General Governor of Ireland, Grand Master.

At first, the number of Knights was limited to fifteen, but in the reign of William IV. it was increased to twentytwo. Every person of or above the rank of a Knight is eligible to be admitted, but up to this time, none but Peers have been elected.

The Officers of the Order are The Prelate (the Archbishop of Armagh); The Chancellor (the Archbishop of
Dubhn); The Registrar (the Dean of St. Patrick's); The Secretary; The Genealogist; The Usher of the Black Rod; The Ulster King of Arms; Two Heralds and Four Pursuivants.

The Star consists of the Cross of St. Patrick gules, on a field argent, surmounted by a trefoil vert, charged with three imperial crowns within a circle of azure containing the motto "Quis Separabit", and the date "MDCCLXXXIII" in letters of gold, the whole encircled by four greater and two lesser rays of silver. 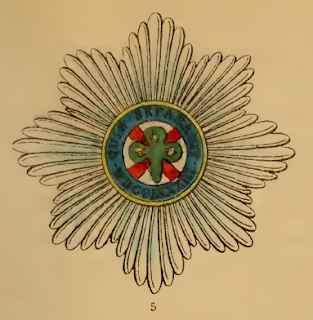 The Badge is of gold, of an oval form, surrounded with a wreath of Shamrock, within which is a circle of sky blue enamel containing the Motto, encircling on a field argent the Cross of St. Patrick gu. charged with a trefoil vert, having on each of its leaves an Imperial Crown or ; in some of the present Badges, however, the field is left open or pierced. The Badge is suspended to the Collar from the neck, but, when the Collar is not used, it is attached to the ribbon and hangs on the left side. 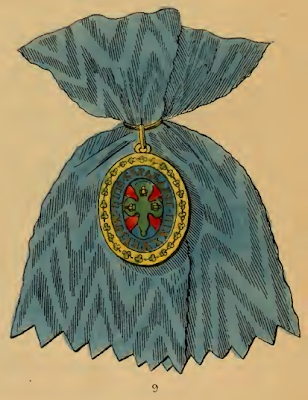 The Collar is of gold, composed of roses and of Harps alternate, tied together with a knot of gold, the roses being enamelled alternately, white leaves within red, and red leaves within white, and in the centre an Imperial Crown, surmounting a harp of gold, from which the Badge hangs. The Collar is worn on all great and solemn feasts, and especially on St. Patrick's Day, the 17th of March. The Ribbon, four inches wide, is light blue, and is worn over the right shoulder. The Mantle is made of rich sky-blue tabinet, lined with white silk, and has on the right shoulder a hood of blue tabinet also lined with white silk. It is fastened by a cordon of blue silk and gold, having a pair of tassels of the sanae materials. 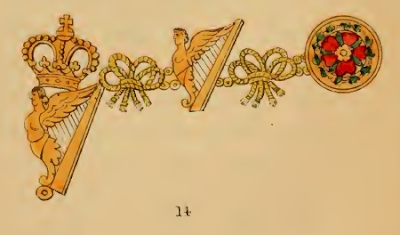 On the left side is placed the Star of the Order. For many years, despite of the injunction of the original statutes that the Knights of St. Patrick should be robed in mantles of Irish manufacture, the dress was invariably made of French satin, but His Excellency, Lord Carlisle, who has always been desirous of promoting Irish industry, restored the original ordinance, and Irish tabinet is now the texture used.