DECORATIONS : GREAT-BRITAIN - THE MOST DISTINGUISHED ORDER OF SAINT MICHAEL AND SAINT GEORGE

Not long after the cession of Malta to Great Britain, and the submission of the seven Ionian Isles to the exclusive protection of the same power, it was deemed advisable to institute an Order of Knighthood for the purpose of bestowing marks of Royal favour on the most meritorious of the lonians and Maltese, as well as on British subjects who may have served with distinction in the Ionian Isles or the Mediterranean Sea.

The Order was founded 27th April, 1818, by letters patent under the Great Seal of the United Kingdom, and a Code of Statutes was promulgated on the 12th August following; but, by its third Sovereign, William IV, the Constitution of "St. Michael and St. George" was so materially changed, and its importance so much enhanced that His Majesty may almost be considered its second Founder. The new Statutes, framed by that Monarch, ordain that the King of the United Kingdom shall for ever be Sovereign of the Order, that a Prince of the Blood Royal being a descendant of the body of the Princess Sophia, Electress of Hanover, shall be Grand Master, and that there shall be three Classes of Knights, first Knights Grand Cross, second Knights Commanders and third Cavalieri or Companions : the first class to be restricted to fifteen, the second, to twenty, and the third, to twenty-five.

All natives of the Ionian Islands, and of Malta, who receive this third class of the Order are styled Cavaliere, "and all natives of Great Britain and Ireland" Companions. The Grand Master is the first and principal Knight Grand Cross, and the Lord High Commissioner to the Ionian Isles has precedency of all other Knights Grand Cross. The Knights Grand Cross are entitled to bear supporters and to encircle their arms with the collar, ribbon, and motto of the Order. The Knights Commanders and Cavalieri also encircle their arms with the ribbon and motto; and the Companions suspend the badge of the Order to their arms.

The Star of a Knight Grand Cross is composed of seven rays of silver, having a small ray of gold between each of them, and over all the cross of St. George, gules. In the centre is a representation of the Archangel St. Michael encountering Satan, within a blue circle, inscribed with the motto "Auspicium Melioris AEVI". 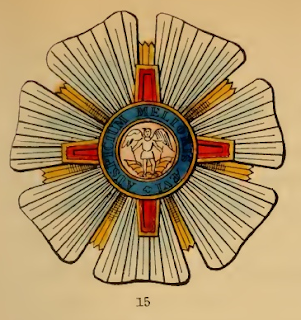 The Collar is formed alternately of lions of England, of Maltese crosses, and of the ciphers S. M. and S. G. having in the centre the imperial crown, over two winged lions, passant guardant, each holding a book, and seven arrows. At the opposite end of the collar are two similar lions. The whole is of gold, except the crosses, which are of white enamels and it is linked together by small gold chains.

The Badge is a gold cross of fourteen joints of white enamel, edged with gold, having in the centre, on one side, the Archangel St. Michael encountering Satan, and on the other, St. George on horseback, encountering a dragon within a blue circle, on which the motto of the Order is inscribed. The cross is surmounted by the imperial crown, and is worn by the Knights Grand Cross to the collar, or to a wide Saxonblue ribbon, with a scarlet stripe from the right shoulder to the left side. 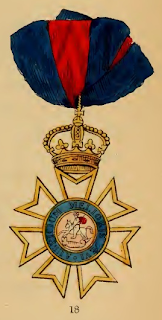 The Knights Commanders wear the badge suspended to a narrow ribbon from the neck, and have on their left side a star composed of four rays, with a small cross of eight points in saltier of silver surmounted by the cross of St. George, gules, and having the same centre as the star of Grand Crosses. 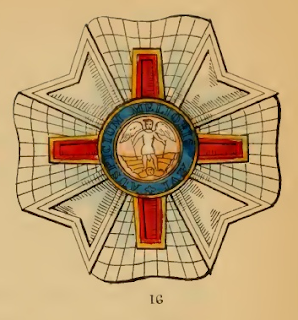 The Cavalieri and Companions wear the small cross of the Order from a still narrower ribbon at the button hole of their coats. The Officers of the Order are : the Prelate, the Chancellor, the Secretary and the King of Arms.