King George IV. founded this Order, when Prince Regent of England, in the name of his father George IIL, on the 12th August, 1815, his birthday, being also the anniversary (101 years), of the accession to the English throne of the Elector, George Louis.

The statutes were revised and modified on the 20th May, 1841 ; according to these, the dignity and power of the Grand Master is always vested in the Crown of Hanover, and the Order is now divided into four Classes :

There is, besides, another class of sub-officers and privates who have distinguished themselves in the field by skill and valour, and on whom is conferred a medal. The possession of the medal entitles the owner to a pension of twenty-four thalers (725). The number of the members is unlimited.

The Grand Cross is conferred on those high military officers who have distinguished themselves by their skill and judgment, when the plan and execution of an expedition has been left to their own discretion and responsibility. It is usually not conferred upon any one below the rank of Lieutenant-general, except in some peculiar cases, when an Ambassador has merited well of his country by his diplomatic skill, or when a Majorgeneral was acting as an independent commander.

The Cross of Commander (first class) is usually not presented to any civilian, or any military individual below the rank of Major-general.

The Cross of Commander (second class), as also the next below it, are bound to no rank whatever.

The presentation of the Order to meritorious subjects of Hanover, usually begins with the lowest, the fourth class, and ends with the first. The Cross of the fourth class is worn by the King himself, as also by the royal Princes.

The badge consists, for the Grand Cross, of a star (No. 1) and a cross, worn by a light blue watered ribbon, four inches wide, across the right shoulder, like a scarf. 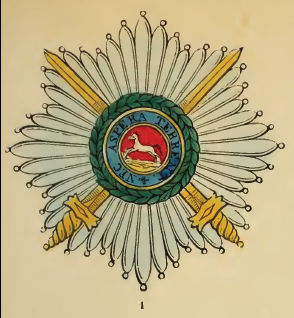 The decoration of the Commanders (first class), consists of a similar but smaller cross. It is worn upon the breast, below the neck-tie, saltire-ways, suspended by a broad ribbon (two and a half inches wide), fastened behind, and at the side of it is worn, upon the left side of the coat, a similar cross embroidered in silver, in the form of a star, but without the crown above it (No. 2). 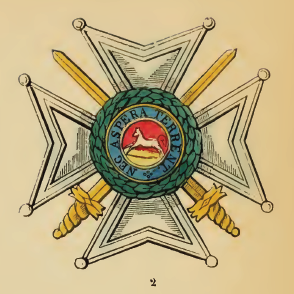 The Commanders (second class), wear a like cross, saltireways, but not as a star upon the left side.

The Knights wear the cross, rather small, at the buttonhole, suspended by a ribbon about an inch wide, which runs through a ring ; the latter is fastened above the crown by the imperial globe.

The badge of the fourth class is a silver cross with the royal initial in it, and is worn in the same manner as the former.

The medal is worn at the button-hole, suspended by a similar ribbon.

The Order is both civil and military, and the difference consists only in the star and cross, which contain, for the military, a laurel instead of an oaken wreath, and are, besides, adorned with two swords. The motto of the Order is : "Nee aspera terrent" (Difficulties do not terrify).

The Orders of deceased members must be returned to the Commission of the College, except the medal, which may remain in the family.

On gala days, or at festivals of the Order, the ribbon of the Grand Cross is exchanged for a golden neck chain, the links of which consist alternately of the Hanoverian crown, a lion passant guardant with upraised tail (the ancient arms of the Guelphs), and the initials "G. R." (No. 5).

The obverse contains, in the red enamelled centre of the cross, the galloping white horse (the crest of the House of Brunswick), and the reverse the initials "G. R." beneath the royal crown, and surrounded, with the first class, by the number of the year, when the Order was founded, upon dull golden ground.

Between the wings of the cross, with all classes, is placed the Brunswick lion.