The William Cross and William Medal were founded on the 2nd March, 1837, by King William IV., for the Hanoverian troops, as a reward for long loyal service. The first distribution took place only after his demise.

The Cross (No. 8), is of gold, and has on the obverse the letters : "W. R. IV." with the crown above them, and on the reverse the number : "25". It is presented to all officers (including staff-surgeons and their assistants), commanders, town-majors, and others in active service, who have served in the army, twenty-five years (the years of war counting double). 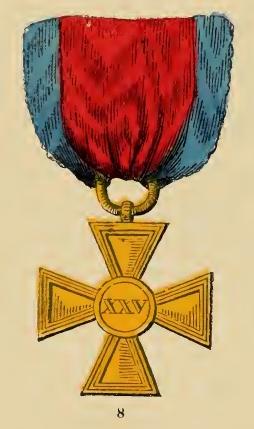 The medal (No. 14), is presented to sub-officers, and officers in active service, who have served sixteen years (the years of war also counting double). It is of silver, with the effigy of William IV. on the front, and the inscription : "Fur sechszehnjahrige treue Dienste ' (For sixteen years' loyal service) on the reverse. 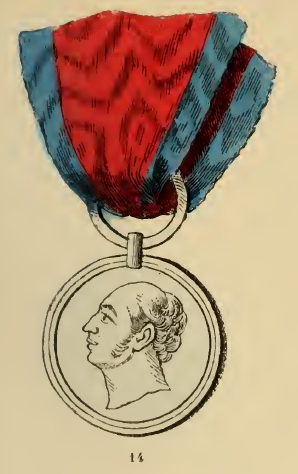 Both cross and medal are worn on the left breast, formerly suspended by a yellow ribbon with white borders, but now by a dark red ribbon with dark blue borders (the ribbon of the English Waterloo Medal).