This Order, which bore, until 22nd October, 1820, the title of: "Ordre pour la Vertu Militaire," was founded on the 25th February, 1769, by Landgrave Frederick II, as a reward of military distinction. In times of peace, it is reserved only for higher officers, while in times of war it can be claimed by all officers, from the rank of General down to that of Lieutenant. It has only one class. The Elector is Grand Master and sole judge of the merits of the candidates.

The badge is an octagonal gold cross, white enamelled, and covered with a crown. The four wings contain (No. 6) the initials of the Elector, and the word : "Virtuti" (To virtue). In the spaces between the wings is the Hessian lion (crowned and erect). It is worn round the neck by a sky blue ribbon with silver borders. 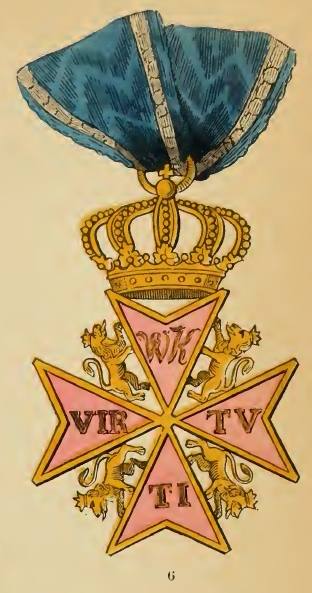