Anhalt's Decoration of Merit, for saving from danger, was founded in December, 1850. It consists of a silver medal, and contains, on the obverse, the bear, crown, and inscriptions of the former insignia, and on the reverse an oak wreath, with the legend : "Für Rettung von Gefahr" (For saving from danger). It is worn at the button-hole, suspended by a green watered ribbon with two narrow red stripes.

On the 29th October, 1847, a new decoration was created at Anhalt-Koethen, for distinguished service by the Anhalt-Koethen Contingency to the German Bund. The death of the Duke, however, which occurred on the 23rd November, 1847, by which the male dynasty became extinct, retarded the publication of the patent until the 9th December, when Duke Leopold Frederick of Anhalt-Dessau ordered that the decoration should contain the initial of the deceased Duke, though he postponed the distribution until after a final convention, relating to the government, was concluded with Duke Alexander Charles of Anhalt Bernburg. 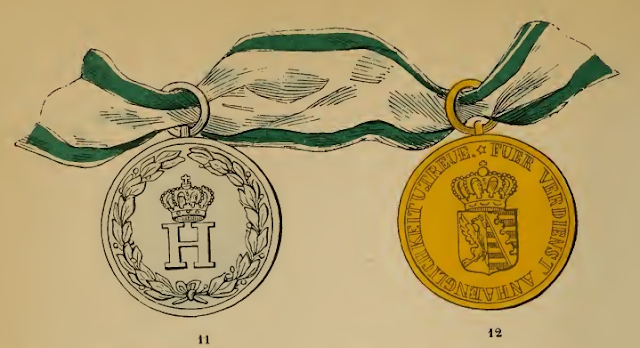 It is a military decoration bestowed for a certain number of years' service ; those spent in campaigns count double, while those passed in prison go for nothing. To the third class belong sergeants and privates ; the badge consists of a black iron buckle mounted in silver : the nmiddle contains the Arms of the ducal house, with the initial "H" to the right, and the cypher "IX" to the left (indicating nine years' service). That of the second class is a silver buckle with a black edge, and the cypher "XV" (fifteen years' service) on it. That of the first class is a similar buckle, but of gold, mounted in silver, with the cypher "XXI" (twenty-one years' service) on it.

The decoration for officers consists of an octagonal golden cross (worn with the same ribbon) ; the round middle scutcheon is white enamelled, and contains on the obverse the initial of the Duke, with the ducal crown above it, and on the reverse the cypher "XXV" in gold (indicating twenty-five years' service, including the period of subordinate rank).

Also in Anhalt-Dessau was established, on the 1st of February, 1848, a similar decoration of honour known as the Military Distinction for Anhalt-Dessau. For sergeants and common soldiers, the badge is a silver buckle ; the centre contains the ducal arms, with the initial of the Duke to the right, and the cypher "XII" (for the second class), or 'XX' (for the first), to the left. It is worn on the left side of the breast, suspended by a green ribbon, the halfwidth of which protrudes on each side of the buckle. For officers and military surgeons, the decoration is a golden octagonal cross, white enamelled in the middle, bearing on the obverse the initial of the Duke, with the ducal crown above it, and on the reverse the cypher "XXV", in golden letters ; it is likewise worn by a green ribbon upon the left side of the breast. When the decoration of the higher class is obtained, that of the inferior must be returned.