DECORATIONS : BELGIUM - THE MEDAL FOR ARTIZANS, MECHANICS AND THE WORKING-CLASSES

The following royal patent was issued on the 7th November, 1847 :

1. A decoration with the symbols of commerce and industry, is to be issued under the name, "Reward for artizans, mechanics, and the working classes". The name of the recipient and the year when granted to be impressed on the reverse.
2. There are to be two classes, one for a gold, and the other for a silver medal.
3. It is to be worn on a small chain of the same metal on the left side of the breast (No. 13).
4. It is exclusively designed for mechanics who join skill to irreproachable conduct.
5. The jury appointed at the Industry Exhibition, is to report on their various merits.
6. The skill of the mechanic or artizan is to show itself in a work distinguished for fine form, wholly or mostly of his own production.
7. The first reward is the silver medal, while the gold is to be awarded to increased progress and skill, after the receipt of the former.
8. The number of the members is limited to one thousand; two hundred to the gold, and eight hundred to the silver medal. 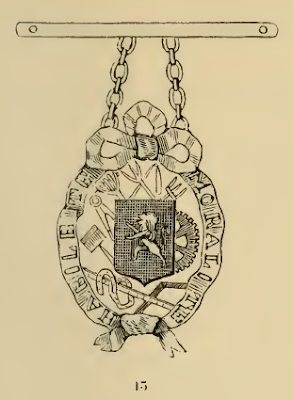