1. Military Service was founded on the 26th December, 1833 ; it consists of a cross, for officers, of gold, and for subofficers and privates of silver. The front shows the letter "L", with a crown above it, and the reverse the words : "XXV. Jahre treuer Dienste" (Twenty-five years' loyal service) (No. 5). It may, therefore, be claimed only after twenty-five years active service. The cross is worn upon the left breast suspended by a red and white ribbon. The years of campaign count double. Since 1839, a similar cross for fifty years' service has been introduced. 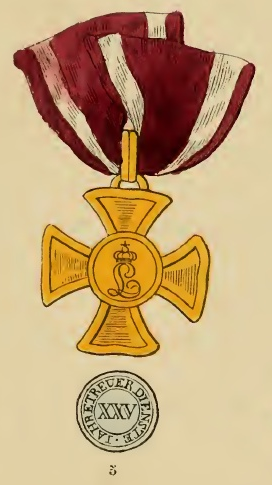 2. Decoration for Field Service was founded on the 14th of June, 1840, for all military grades ; it consists of a medal cast of heavy or gun metal. The front exhibits the letter "L" with a crown above it, and the inscription : "Gestiftet am 14 Juni, 1840" (Founded on the 14th June, 1840), and the reverse the words : "Für treuen Dienst im Kriege" (For faithful service in war) (No. 9). It is worn on the left breast suspended by a red ribbon with white borders. After the decease of the owner, the medal remains in the family. 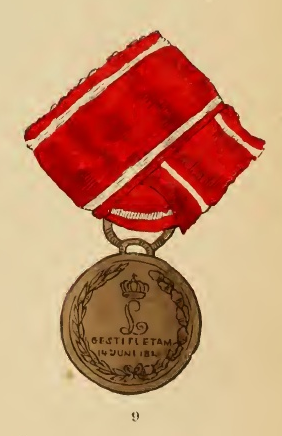