DECORATIONS : HESSE GRAND DUCHY - THE ORDER OF MERIT AND OF THE HOUSE PHILIPPE-LE-BON

It was founded on the 1st of May, 1840, by the Grand Duke Louis II., in honour of one of his ancestors, one of the greatest Princes of the House of Hesse. It is divided into four classes : Knights of the Grand Cross, Commanders of the first and second classes, and Knights.

The obverse of the cross shows the effigy of Phillppe-le-Bon upon a sky-blue ground, with the legend : "Si Deus nobiscum, quis contra nos ? (If God be with us, who is against us ?) while the reverse gives the Hessian arms, with the legend : "Ludovicus II. Magn. Dux Hessise instit" (Founded by Louis II. Grand Duke of Hesse) (No. 7).

The Knights of the Grand Cross wear the decoration by a ribbon across the shoulder, and the star (No. 6) upon the breast. 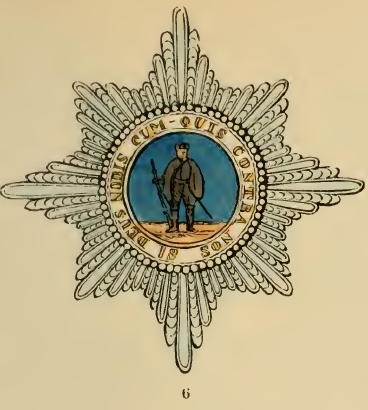 The Commanders, of both classes, wear it by a narrow ribbon round the neck, but those of the first class wear besides upon the left breast, the embroidered cross (No. 8). 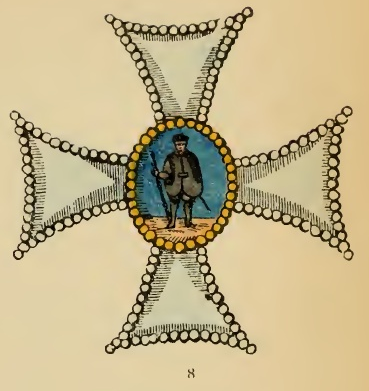 The Knights wear it in smaller size suspended by a ribbon at the button-hole. Except on solemn occasions, the Knights of the Grand Cross, when they also possess the same degree in the Order of Louis, wear the present cross round the neck by a narrow ribbon.