This order was founded in 1807, by the Grand Duke Louis L, as a reward for civil and military merit, for all classes, high and low. It was first distributed by him on St. Louis day, (24th August), the namesday of nearly all the members of the Grand Ducal House. But as the founder had published neither its statutes nor its special title, it passed by various names such as : Order of Merit, Order of Louis, &c., until the 14th December, 1831, when the Grand Duke Louis II. thought proper to promulgate the statutes and modify them in one particular point, with regard to the star, which, instead of being as formerly the same with the Commanders of the first class, and the Knights of the Grand Cross, was now superseded for the former class by a silver star with four points, in which is embroidered the cross of the Order.

In connection with the Order are, also, gold and silver Medals of Merit. The badge consists, for the Grand Cross, of an octagonal black cross set in gold, with red edges and enamel. The centre of the red enamelled obverse contains the letter "L", and within the white ring round it are seen the words in golden characters : "Fur Verdienste" (For Merit). The reverse is a black field, and contains, in golden
characters, the words : "Gott, Ehre, Vaterland" (God, honour, country), surrounded by a laurel and oaken wreath upon white enamelled ground.

The cross, with the crown above it, is worn by the Knights of the Grand Cross across the left shoulder towards the right hip by a black-watered ribbon, three and a quarter inches wide, and with red borders. They wear besides upon the left breast an octagonal silver star, in the black centre of which are seen, surrounded by a laurel and oaken wreath, the above words : "Gott, Ehre, Vaterland" (Nos. 1 and 2). 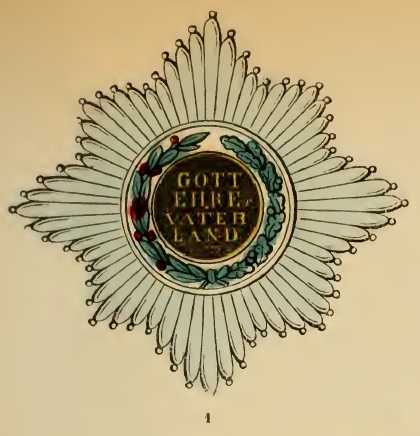 The Commanders' first class, wear the cross, by a ribbon, round the neck, and besides upon the breast, a silver star with four points, in which is embroidered the cross of the Order (No. 3). The Commanders' second class wear the same, but without star. 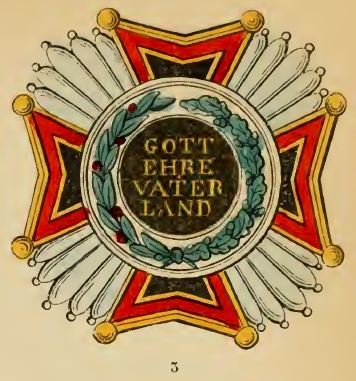 The Knights of the first and second classes wear the same cross upon the left breast suspended by a ribbon of the above colours.

The size of the cross, and the width of the ribbon diminish with the respective inferior classes.

To the first class of Grand Cross are only admitted Princes by birth, or individuals with the title of "Excellency".