This order was founded on the 21st August, 1847, by King Oscar. It is the first independent Order the country ever possessed. The name is to commemorate the illustrious monarch who freed (1015) Norway from the sway of Denmark, and introduced Christianity into that realm. To this latter circumstance was owing his canonization (1033).

The Order is designated as a reward for all classes, who distinguish themselves in patriotism, or in the arts and sciences. It consists of an octagonal golden cross, white enamelled, and surmounted with the royal crown. The middle of the obverse is encompassed by a blue and white ribbon, and contains the arms of Norway (a gold lion, crowned), while the reverse shows the motto: 'Ret og Sandhed' (Right and truth) (No. 3).

Between each of the arms of the cross is seen a crowned 'O'. It is worn suspended by a red watered ribbon with blue and white borders, by the Knights of the Grand Cross, across the right shoulder; by the Commanders round the neck, and by the Knights at the button-hole. The Knights Grand Cross wear, in addition, a star (No. 1), and the Commanders another (No. 2). The cross of the military has, in addition, two crossed swords beneath the crown. 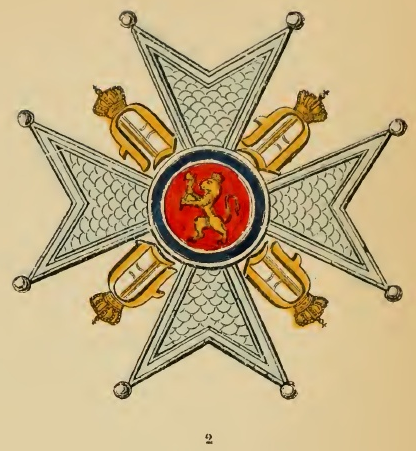 The first Chapter was held on the 23rd August, 1847, when the King nominated eleven Knights Grand Cross, twenty-two Commanders, and forty-six Knights. Among the first, were the celebrated savans, A. Humboldt, Berzelius, and Oehlenschlager. It may be mentioned, that among the Commanders was the Bishop of Drontheim, the same who refused to anoint the Queen, alleging as a reason, that the fundamental law of the realm only speaks of the coronation of a King, but not of a Queen.