DECORATIONS : OLDENBOURG (GRAND DUCHY) - ORDER OF MERIT AND OF THE DUCAL HOUSE OF PETER FREDERICK LOUIS

This Order (Nos. 1 to 6) was founded on the 27th November, 1838, by Duke Paul Frederick, in memory of his father, who, the patent says, had himself resolved upon the foundation of a similar Order, as reward to subjects or foreigners for distinguished merit in the arts and sciences, or in the more humble pursuits of domestic and civil life.

The reigning Grand Duke is always Grand Master. The Order consists of Capitulars and Honorary Members. Both divisions are equal in rank, and have four classes : Knights Grand Cross, Great Commanders, Commanders, and Knights Small Cross.

Only natives and citizens of Oldenburg can be received amongst the Capitulars. The Capitular of a lower class may, at the same time, belong to a higher class as Honorary Member. The Princes in direct male line from the Ducal House of Peter Frederick Louis are, by birth. Honorary Members of the Grand Cross. The heir presumptive to the Grand Duchy, bears the title of Grand Prior.

Proofs of valour and distinction in military service entitle to the nomination into the fourth class. The division of Capitulars consists of :

The number of Honorary Members in the Grand Duchy, is, exclusive of the Ducal Princes, limited to four Knights Grand Cross, four Great Commanders, eight Commanders, and sixteen Knights Small Cross. In time of war, the latter class may be augmented as regards the military. 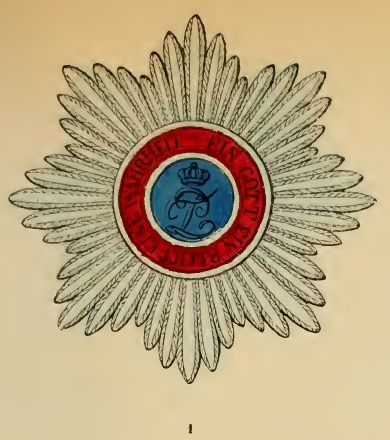 Military persons who have received the small cross in war, wear, in addition, upon the ribbon of the Order, a round cockade formed of the same ribbon.

The Capitulars wear, besides, a particular decoration, varying with every class (Nos. 3 to 6). 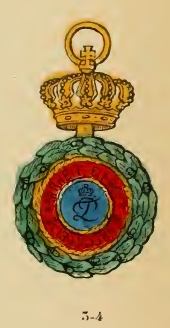 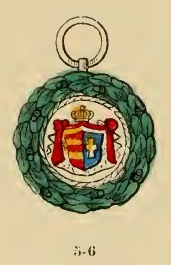 The Chapter is usually held on the 17th January, the birthday of Duke Peter Frederick Louis. The middle of the star and obverse of the cross contain the initials of the Duke Peter Ferderick Louis.