1. Military Decoration of Honour. This decoration was founded by Duke Frederick Augustus, to save from oblivion - as the patent says - special deeds of valour, such as saving the life of a comrade, etc., performed by a soldier. It consists (Nos. 1 and 2) of a medal, gold or silver, and is destined only for sergeants and those of lower rank It is worn at the button-hole of the regimentals, suspended by a dark brown and sulphur-yellow ribbon. The owner of the silver medal receives with it an addition equal to half of his pay, and the owner of the gold medal, an addition equal to his full pay, in time of peace. The addition is retained even after promotion. The owner of the silver medal is not excluded from the additional reward of the gold medal, if subsequent merit entitle him to it. The medal remains in the family of the recipient after his decease. 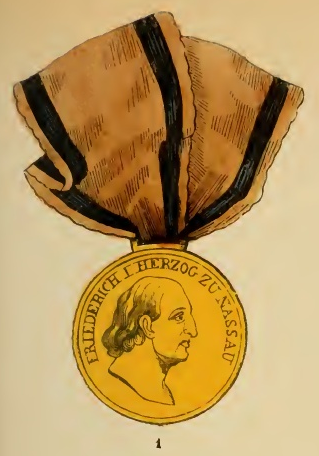 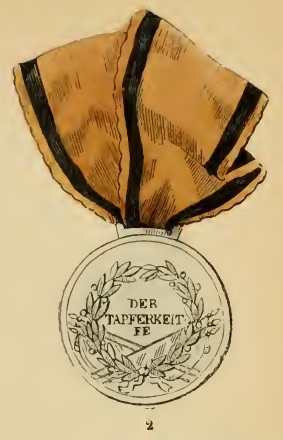 2. The Civil Medal of Merit, is distributed in gold and in silver to civil officers for long and faithful service. It also remains with the heirs of the deceased owner. The impression shows, each time, the effigy and name of the reigning Duke.

a. For officers, of a golden cross, showing in the middle of the front, a "W", and in the arms of the cross : "XXI. Treue Dienstjahre" (Twenty-one years' faithful service), while the reverse contains in the middle: "Der 25 Februar, 1834" (25th February, 1834), as the day of the first presentation. It is worn on the left breast by a blue ribbon (No. 4). 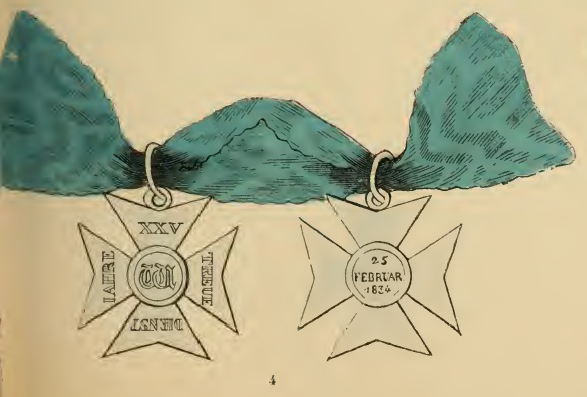 b. For sub-officers, the members of the band, and privates, of a silver cross, with the same inscription as the above, and with the only difference, that the Roman cypher upon the upper arm of the cross is "XXIL, XVI.", X., (No. 5) according to the respective classes. 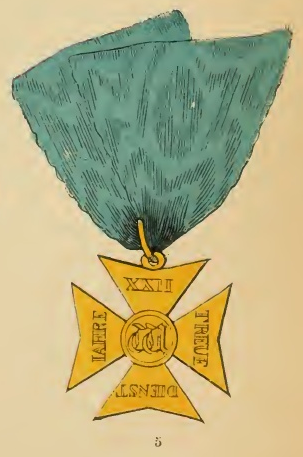 An increase of pay is granted to sub-officers and soldiers on receiving the silver cross.

4. The Waterloo Medal was founded by Duke Frederick on the 23rd December, 1815 (No. 3), for officers and privates who had taken part in that battle, or were at least in active service at that period. It is worn suspended by a dark blue watered ribbon with orange coloured borders. 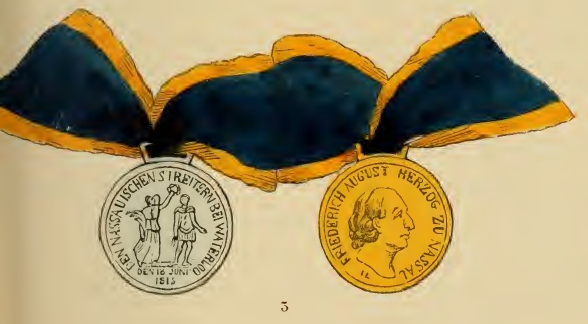