1. The Cross of Merit—In 1820, the Elector William I. founded a Silver Medal of Merit for both civil and military individuals, who should distinguish themselves by benevolent actions to their fellow citizens, or by special courage in dangers, and other circumstances of national import. In 1831, the medal was exchanged for a cross, without, however, modifying its original statutes. It is divided into two classes, and consists of gold and silver crosses (No. 9). The inscription within the four wings is : "Für Verdienst und Treue" (For merit and loyalty), with the initials of the founder in the centre. 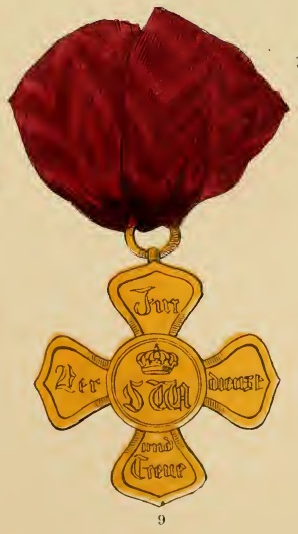 2. The Medal of Remembrance and Honoury was instituted by the Elector William II. on the 14th March, 1821, for the Hessian military of all ranks and stations who had passed the Rhine, and participated in the wars of 1814 and 1815. It was cast of metal from captured guns (No. 10). 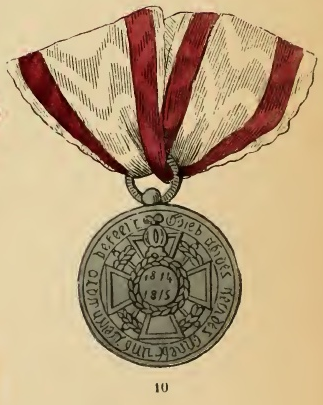 3. The Cross of Military Distinction for Sub-officers and Soldiers was founded on the 19th August, 1835, by the Co-Regent Elector. The statutes say : That the claim thereto is founded on long active service, from and below the rank of sergeant. It is divided into three classes, for twenty, fifteen and ten years' service (the years of war counting double). It is worn upon the regimental uniform, suspended by a crimson red ribbon with blue stripes (No. 11). The distribution takes place every year, on the 20th August. 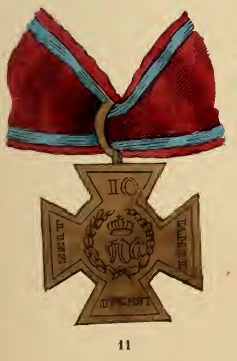