DECORATIONS : HESSE ELECTORATE - THE ORDER OF THE IRON HELMET

This order was founded by the Elector William I., on the 18th March, 1814, as a reward for military distinction to both officers and men in the war of liberty of 1814.

The decoration consists of an Iron Helmet upon the Brabant Cross ; it is divided into two classes, and one Grand Cross. Both classes have the same cross of cast iron, set in silver. The centre of the front shows an open helmet, at the sides of which are the initials "W. K." and below, the number "1814" (No. 7). It is worn at the button-hole. 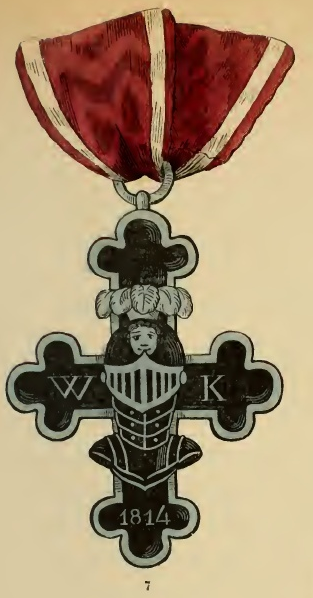 The first class wear besides, on the left breast, a cross formed of red ribbon with white borders. The Grand Cross is double the size of the previous, and is worn round the neck. The first class cannot be obtained without previously possessing the second. The Grand Cross is only conferred after a victorious battle, on the commanding officer who has, by skill and courage, contributed to its success, or who has held out a fortress against the besieging foe. In the Iron Helmet, which was distributed in the succeeding year, in 1815, the Brabant Cross was superseded by the German Cross. (No. 8). 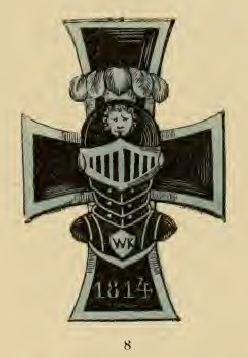