1. The Medal of Honour was founded on the 30th April, 1815, at the suggestion of Field-Marshal Blücher, who bore testimony to the gallant conduct of the Oldenburg regiment in the war wdth France. The decoration was accordingly distributed amongst those officers and men who took part in any one of the battles. It consists of a medal (No. 7), and is worn on the left side of the breast suspended by a dark blue ribbon with two red stripes. 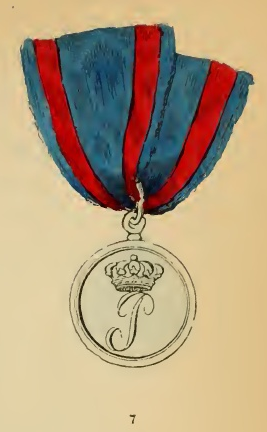 2. The gold and silver Crosses of Honour, for twentyfive years faithful Military Service (No. 8).It was founded on the 24th December, 1838, as a reward for long military service as above. The decoration consists of a cross, the obverse of which contains the number 'XXV' in Roman cyphers, and the reverse, the initials 'P. F. L.' (Peter Frederick Louis) in gothic characters, and surmounted by a crown. It is worn on the left breast, suspended by a red ribbon with narrow blue borders. 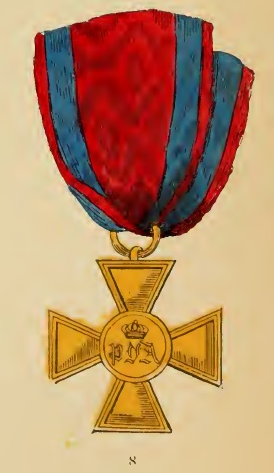 For officers, the cross is of gold, and for sub-officers and privates of silver. Non-combatants in the army, such as military surgeons, mechanics, secretaries, and other officials, may claim the decoration, if present, at least, in one campaign. Lieutenants receive with the decoration a monthly addition to their pay of 10 gulden (£1), and sub-officers and those under, an increase amounting to the half of their pay. The day of distribution of the decoration, is the 24th December of each year.