As this is, properly speaking, a Portuguese Order, its history will be detailed among the Orders of Portugal, and we shall, therefore, confine our remarks here to a few principal particulars.

Pope Clement V, it is well known, abolished, in 1312, the Order of the Templars. The measure was then objected to by King Dionysius of Portugal, who allowed the Order to exist in his dominions, with all its rights, privileges and possessions. It naturally led to misunderstandings between the two courts, until Pope XXII. (successor of Clement), compromised the matter by consenting, in 1319, to the existence of the Order in Portugal under a new name : 'The Knights of Christ', but reserved to himself, and his successors, the right of creating a similar Order also in the Papal States, of which right his successors avail themselves to this day, by conferring this Order, as a distinction of merit on both native and foreign Catholics.

The Roman Order of Christ has only one class. The decoration consists of a red enamelled gold cross, with another white cross in the middle, surmounted by a crown. (No. 5). 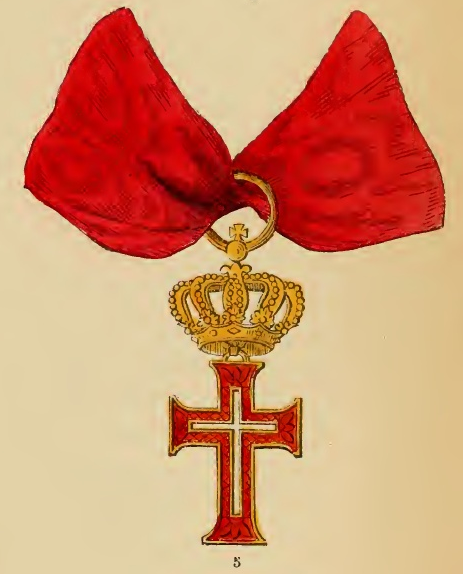 To this cross is appended, above the crown, when for military merit, some golden trophies (No. 6).

It is worn round the neck by a red ribbon, accompanied by the star (No. 4) upon the breast. The Cross in the middle of the star is adorned with precious stones or pearls. Formerly, the Order was worn suspended by a gold chain. The candidates of the Roman Order are not obliged, like those of the Portuguese, to prove their noble descent ; nor is there any particular costume for the Roman Order. 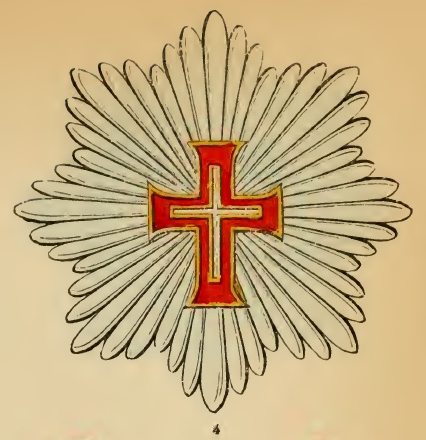