DECORATIONS : AUSTRIA - THE ORDER OF THE IRON CROWN

On the 17th March, 1805, the States-Council of the Italian — previously Cis-Alpine — Republics, changed the form of government into a Monarchy, electing Napoleon as the first hereditary King of Italy. He was crowned as such at Milan, on the 20th May of the same year. The crown used, on that occasion, was that of the ancient Longobardian Kings, which had been preserved in the Treasury of the church at Monza, near Milan. It consists of a golden hoop about four fingers wide, finely chased, and adorned with precious stones in the form of an antique diadem, behind which is attached an iron ring of about one finger wide, which, according to tradition, had been forged from the nail of Christ's Cross, and from which the title is derived. Napoleon founded, in commemoration of his coronation, and at the same time as a reward for those who were to distinguish themselves in his new kingdom, on the 5th June, 1805, an Order, for the decoration of which he adopted the figure of the "Iron Crown", and called it "Ordine della Corona di Ferro" (Order of the Iron Crown).

The reigning Kings of Italy were — by the statutes — to be Grand Masters of the Order. The number of the Knights was originally limited to six hundred and twenty, divided into three classes : Dignitaries (twenty). Commanders (one hundred), and Knights (five hundred), all of whom were to be in the enjoyment of pensions. By an Imperial decree of the 19th December, 1807, the number was increased — owing to the increased extent of the kingdom — to thirty-five Dignitaries, one hundred and fifty Commanders, and eight hundred Knights, exclusive of foreigners and members of the Imperial family.

Frenchmen, generally, were not to be considered as foreigners. The pension of the first class was fixed at 3000, of the second at 700, and of the third at 300 lire. The badge was the Iron Crown, the middle of which contained the French Eagle with raised wings. Round the ring of the Crown was the legend : "Dio me la diede, guai a chi la tocca" (God has given it to me, woe to him who dares to touch it !) while the front exhibited the effigy of Napoleon.

The decoration of the first class (Dignitaries) was of gold, worn by them across the right shoulder, suspended by a broad ribbon of orange colour and green borders, and accompanied by a star at the left side of the breast. The Commanders had it also of gold, while that of the Knights was only of silver it was worn by the two latter at the button-hole of the left side, suspended by a small ribbon, and without the addition of th star. After the fall of Napoleon, the Order was forgotten, until 1815—16, when the Emperor Francis I, during his visits to his new Italian provinces, re-introduced it in a modified form its first distribution took place at Milan on the 1 2th February, 1816 — the birthday of the Emperor. The order then received the name: "Austrian Order of the Iron Crown", and by the statutes published on the same day, it was provided, that :

1. The function of Grand Master should be inseparably vested in the Imperial Crown of Austria, and the nomination of members solely dependent on the will of the Emperor.
2. No one should be allowed to claim or petition for the Order.
3. The Knights to be divided into three classes, without any further distinction beyond that of the number, which was limited for the first class to twenty, the second to thirty, and the third to fifty, exclusive of the princes of the Imperial House.
4. All individuals of merit and distinction to be eligible for the Order.

The decoration of the previous Order was abolished, and that of the new one (No. 13) now consists of a golden crown (of the same form as the Iron Crown), upon which is placed the Austrian eagle on both sides, bearing on the obverse a blue scutcheon upon the breast, with the letter F (Francis) in it, and on the reverse the year 1816 (the year of its foundation).

The Knights, of the first class, wear the decoration across the right shoulder suspended by a broad gold-yellow ribbon with dark blue borders, in addition to a star, embroidered in silver, on the left side of the breast, the centre of which contains the Iron Crown, and round the blue edge are inscribed the words : "Avita et Aucta" (Ancient and extended). (No. 12). 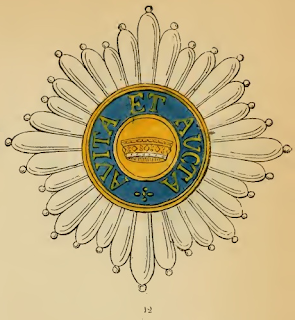 On solemn occasions the decoration is worn by a gold chain round the neck, the links of which consist alternately of the letters in monogram "F. P.", the Iron Crown, and a wreath of oak kaves. (No. 16).

The second class suspend the order round the neck, and the third at the button-hole — each without the star. The Knights are not allowed to adorn it with brilliants, without special permission of the Grand Master. The tri-coloured costume, (yellow, blue, and white) consists of a yellow velvet under-garment reaching down to the knees, and laced by a silver cord from the right arm down to the hip, while the lower part is left open. The whole is lined with white taffetas, and edged with silver embroidery. Hose and stockings are of one piece, of white silk ; the shoes are of white velvet, lined with yellow satin, while bows of blue satin with silver fringes are used instead of buckles. The cap is of blue velvet with white lining, to which is attached a collar of blue velvet falling and extending over the shoulders, and a flap twisted round with silver cords. The costume finishes with a mantle of blue velvet, richly embroidered, and fastened by a clasp on the right shoulder, while the left part is adorned with a star. Above the mantle is a straight ruff of lace. The mantles differ in size. That of the first class has a long train; that of the second barely reaches to the ground, while that of the third only extends to the middle of the leg. The sword is straight, the handle forms a cross, and is adorned with silver mountings, while the scabbard is of blue velvet. It is suspended from a sash of similar
velvet with silver embroidery, and rests in a sword pocket.

The ceremonies of the nomination are the same as with all other Austrian Orders. The annual festival is held on the first Sunday after the 7th April — the day when the Lombardo-Venetian kingdom was established.