DECORATIONS : DENMARK - THE ORDER OF THE ELEPHANT

Before entering on the history and statutes of this illustrious institution, it will be as well to give a few prefatory remarks concerning the general principles which regulate the two Danish Orders. Of both, the King is the head, and distributes them at pleasure. The affairs of both are managed under his presidency by a "Chapter of the royal Orders", established at Copenhagen on the 28th June, 1808. Its chief business is to watch over the conduct of the members, to report on them, and endeavour to settle their private disputes amicably.

The officers of the two Orders consist of a Chancellor, Vice-Chancellor, Bishop, Secretary, Marshall, Treasurer, Master and Vice-Master of ceremonies, Vicar and Historian. The festival days, common to both, are the 28th June, the birthday of King Waldemar, and the respective birthdays of the reigning sovereigns. The Chapter meets on both days; at the Castle of Frederigsborg on the 28th June, and at the Castle of Rosenberg on the birthday of the reigning King.

The Order of the Elephant is one of the most striking proofs that the dignity of an Order is elevated in proportion to the rarity of its bestowal. For, though Denmark only occupies a third rank among European states, the Order of the Elephant commands as high a respect in public opinion as does the Golden Fleece, or even the Garter. The date of its origin cannot be ascertained with historical accuracy, since even the Danish historians themselves are not agreed on the point.

Some would have it founded during the time of the first Crusade, others in the time of Kanut VI. (consequently at the end of the twelfth century), while others refer its creation to the second half of the fifteenth century, under Christian I. The Danish government in its official documents, assumes the date of the foundation to fall in the first half of the fifteenth century, while Christian I., it says, has only renewed the Order in 1458.

That the Order was originally of a religious character is evident, not only from the circumstance that it required the Papal consent (of Pius V. and Sixtus VI. in 1462 and 1464) but also from the name : "Society and fraternity of the Holy Virgin Maria", which the fifty Knights, the number as at first fixed, had borne. The surmise is further confirmed by the insignia of the Order, which consisted originally of the figure of the Virgin with the infant Jesus in her arms, as also by the collar of the mantle in the shape of a monk's hood, which the Knights still wear on festival days. It has, however, entirely lost its religious element since the alteration of its statutes by Christian V. on the 1st December, 1693. Since that time it ought only to count thirty Knights, exclusive of the Princes of the blood who are by birth entitled to the Order, though they cannot wear it before the completion of their twentieth year.

All the other Knights, if Danes, must have professed the Evangelical religion, for at least thirty years, and be declared by the Board of Enquiry, previous to their nomination, worthy of the Cross of Danneborg. This last regulation is, however, no longer strictly enforced, nor is the number of the Knights now strictly limited to thirty.

The badge of the Order (No. 2) is a white enamelled elephant with golden tusks, a blue cloth covering, a battlemented tower upon his back, and a negro upon his neck with a spear in his hand. 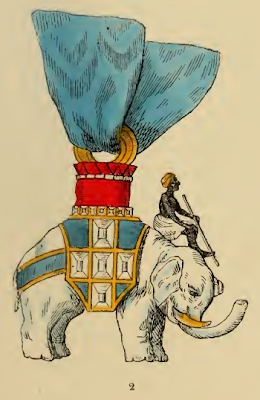 This decoration is worn suspended by a bright blue watered broad ribbon across the left shoulder towards the right hip. On festival days, it is suspended by a golden chain (No. 3) consisting of towers and elephants with blue coverings, upon which is seen the Golden letter D (Dania). 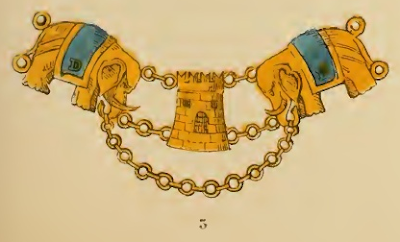 The Knights wear, besides, upon the left breast a star, in the centre of which is a snaall red shield, charged with a cross formed of brilliants and surrounded by a silver laurel wreath (No. 1). The costume of the Knights, on festival days of the Order, consists of a jacket and short breeches of white satin; of a mantle of crimson velvet with a long train, lined with white fur; a collar in the form of a hood; and a black velvet hat with red and white feathers. 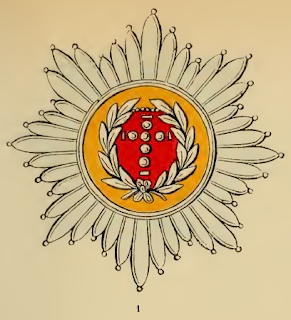 The King wears, on such occasions, a mantle lined with ermine, and upon the hat a black heron plume and white feathers. The motto of the Order is : "Magnanimi Pretium" (Reward of the high minded or magnanimous).

The special festival of the Order which used to be held on Whit-Tuesday, has, since 1808, been transferred to the 1st January.