DECORATIONS : GREECE - THE ORDER OF THE REDEEMER

This order was founded on the 1st June, 1833, by King Otho, in commemoration of the dehverance of Greece. It is conferred both on natives and foreigners who either rendered important services during the War of Independence, or have distinguished themselves in industry, commerce, arms, arts or sciences.

The number of the first four classes is limited - the Grand Crosses to twelve. Grand Commanders to twenty. Commanders to thirty, and Knights of the Golden Cross to one hundred and twenty (all exclusive of the Princes of the blood royal, and of foreigners), while the fifth class is unlimited.

Greek subjects cannot enter the higher classes without passing first through the lower. In promotion, only worth and merit are to be considered, without regard to rank, birth, &c.

By Art. 12 of the Statutes, a sufficient sum is annually to be voted in the budget for the Order, to enable the College to pay the annual pensions to the members.

The badge consists of an octagonal white enamelled cross beneath a royal crown ; the wings of the cross are connected with each other by a wreath of oaken and laurel leaves, while the centre of the obverse contains, the arms of the country, surrounded by the words: Thy rights, O Lord, are glorified with power.

The reverse shows the effigy of King Otho, with the legend: Otho, King of Greece. (No. 2).

The Order is worn suspended by a blue watered ribbon with white borders ; the Knights wear it at the button-hole, the Commanders (both classes) round the neck, and the Grand Crosses across the left shoulder towards the right hip. The Grand Crosses and Grand Commanders wear besides, on the left breast, the star (No. 1.) embroidered in silver ; the star of the latter is somewhat larger than that of the former. No member can appear before the King or the Princes of the blood royal, or on public festivals without the decoration of the Order. 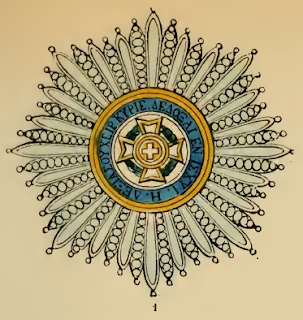