1. Medal for faithful Service was founded by King William, on the 19th February, 1825. It is bestowed in bronze for twelve, and in silver for twenty-four years of military service ; it is worn at the button-hole, on the left side (No. 11). 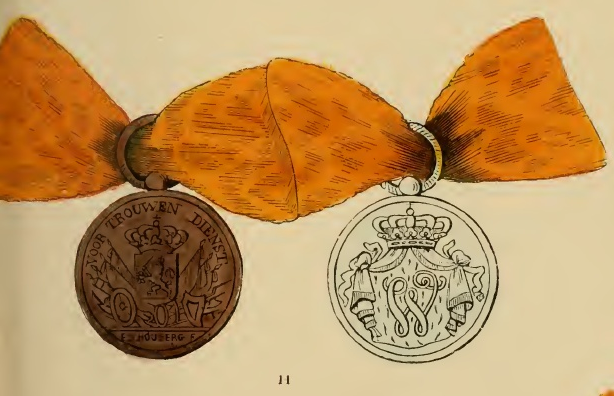 2. Medal for Courage and Loyalty, was founded on the 24th January, 1839, for the native troops of the Colonial army, who belong to no European corps. It is of silver and of bronze ; the first is conferred for particular distinction, or on those who are already in possession of the latter. It is worn on the left breast, suspended by a blue ribbon. The motto : "Im Namen des Konigs" (In the name of the King), is surrounded by the legend : "Für Muth und Treue im Hollandischen Indien" (For courage and loyalty in Dutch India). With the decoration, the pay is increased, by half (with the silver), and by a third (with the bronze).

3. Medal of the Hague, was distributed amongst those who had first taken up arms on the 17th November, 1813, to repulse the French, and re-establish the legitimate government. The front shows two swords, with the motto : "Für das Vaterland und Oranien" (For the Fatherland and Orange); and the reverse, the words : "XVII November, MDCCCXIII." while the centre contains an oaken and laurel wreath. It is worn suspended by a ribbon of the colours of the town, blue and yellow.

4. Medal of Dotrecht was distributed for a similar circumstance as the previous, amongst the people of the place. The front shows the beak of a ship, and a gun covered by a mural crown, with the words : "Für unsre Mauern und unsre Wohnungen" (For our walls and dwellings). While the reverse exhibits, within a laurel and oaken garland, the inscription : "Dotrecht, XXIV November, MDCCCXIII."

5. Medal of Naarden, was presented to the citizens of Amsterdam' who co-operated at the siege of Naarden, occupied by the French. The front shows, within a laurel and orange wreath, the words: "Belagerung von Naarden, 1814" (Siege of Naarden, 1814). The reverse exhibits, within an oaken wreath, the words : "Verliehen vom Central-Comite in Amsterdam — N. N." (Presented by the Central Committee at Amsterdam to . . . name of recipient). It is worn suspended by a tri-coloured ribbon, white black and red. 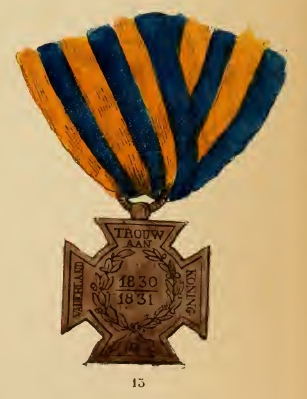 7. The Cross of Hasselt, was cast from the guns taken at the battle of Hasselt, 8th August, 1831, and was distributed amongst the military who participated in that aifair. (No. 13). The same cross, but with the ribbon No. 14, and the inscription : "Vrywilling" (Volunteer), on the reverse, was distributed amongst the volunteers engaged in the struggle with Belgium, in 1831. 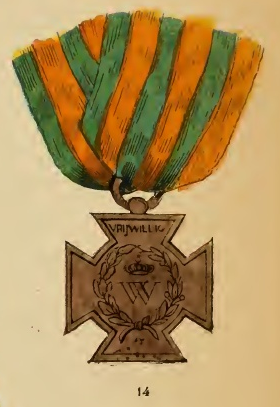 8. Medal of Antwerpj was founded on the 31st of May, 1833, for those who had distinguished themselves at the defence of the citadel. (No. 12). 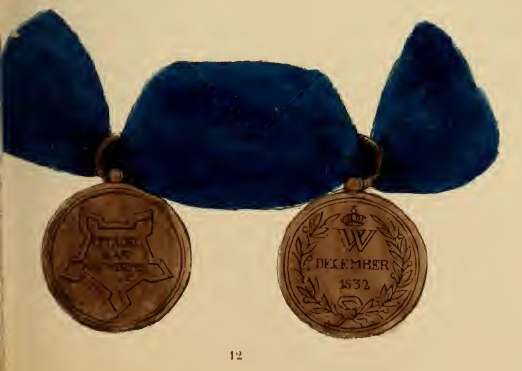