DECORATIONS : GREAT-BRITAIN - THE MEDALS OF HONOUR

Medals were, at various times, conferred for great naval actions; for Lord Howe's Victory of the 1st June, 1794, for Cape St. Vincent, for Camperdown, for the Nile, for Trafalgar, for Duckworth's capture of the French squadron in 1806, for Captain Hoste's defeat of the enemy's squadron 1811, &c.

In 1831, a Medal was instituted, to reward the long and faithful services of Seamen and Marines of the Royal Navy. It is of silver, having on one side the words, "For long service and good conduct", and on the other, an "Anchor and Crown". The name of the person to whom the Medal is accorded, is engraved in the centre of the Medal, which is worn to a narrow blue ribbon.

Military Medals, Crosses, and Clasps, have also been granted to the British army for many glorious actions : for Maida ; for the brilliant victories of the Peninsula ; for Waterloo, and for the Crimea.

In July, 1830, King William IV. was pleased to command that a Silver Medal, "for long service and good conduct", should be granted to meritorious soldiers; and regulations for its distribution were then established. The Medal, worn to a narrow crimson ribbon, has upon the obverse, the Royal Arms, with the rank and name of the soldier ; and on the reverse, the words, "For long service and good conduct".

For the Battles of Roliça and Vimeira, one medal only was given to those officers who were engaged in both or in either. 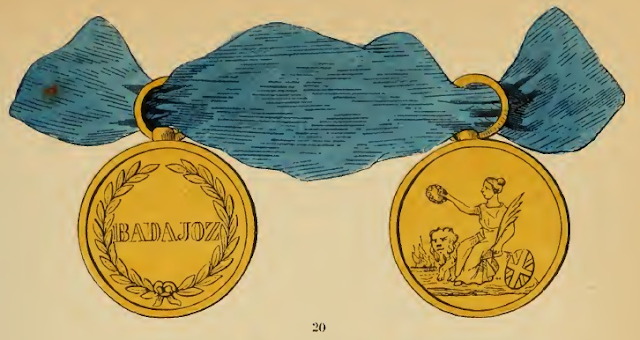 In consequence, however, of many officers having received several medals, it became inconvenient to wear them ; and towards the close of 1812, a new arrangement was adopted.

It was determined that no more than one medal should be worn by any individual; that for every other battle wherein he might distinguish himself, he should wear, on the ribbon to which his medal was suspended, a gold clasp, with the name of the event, until the number of such clasps amount to two. In case he should again signalise himself, he was to receive (instead of the Medal and Clasps formerly borne) a Gold Cross, having in each compartment, the name of one of the four battles in which he was present ; and for every subsequent affair, a clasp, with the name of the battle or action, was to be issued, which clasps were to be attached to the ribbon above the cross.

The Waterloo Medal is of silver, nearly an inch and a half in diameter, having on one side the head of the Prince Regent, inscribed, "George P. Regent" ; and on the other, is Victory, holding a palm branch, and seated on a pedestal, inscribed, "Waterloo", under which is the date, "June 18, 1815" ; over the figure of Victory is the name of "Wellington". Round the edge, the name of the officer or soldier to whom the Medal was given, his rank, and the number of his regiment are engraved. 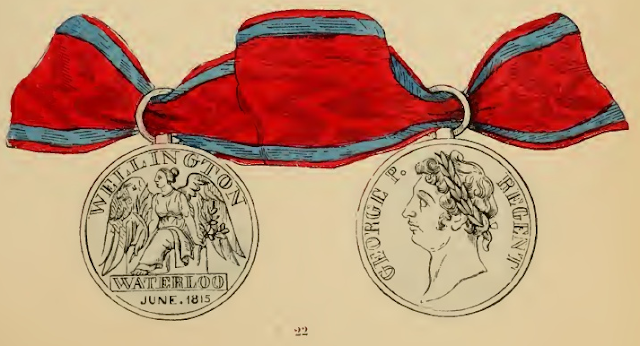 The Medal for the Crimean Campaign, was instituted on the loth December, 1854, and was awarded to all the officers, sub-officers, and privates who served in the Crimea. Clasps, with the words, "Alma, Balaklava, and Inkermann", inscribed on them, were also distributed amongst those who were present in those Battles.

A Silver Medal, suspended to a sky-blue ribbon, is also accorded for distinguished service in India.