DECORATIONS : LUXEMBURG (GRAND DUCHY) - THE ORDER OF THE OAKEN-CROWN

It was founded by King William II. of the Netherlands, on the 29th December, 1841, for all classes of society, for distinguished merit in the army, civil service, or the arts and sciences, and may, in some instances, be also conferred upon foreigners.

The King is Grand Master, and the dignity cannot be separated from the Grand Ducal crown. The Order consists of four classes: Knights of the Grand Cross, Knights with the star of the Order, Commanders, and (simply) Knights.

The badge (No. 4) is a square silver star with a green enamelled middle which shows a golden "W" beneath the Grand Ducal crown, with the motto in golden characters : "Je maintiendrai" (I will maintain), upon red enamelled ground. The motto is encircled by an oaken crown, whence the name of the Order is derived. 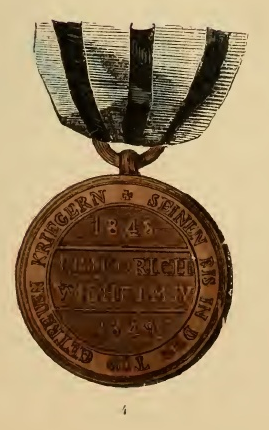 The jewel of the Order (No. 3) forms a square cross white enamelled and set in gold, containing upon green enamelled ground in the middle, a golden "W" beneath the Grand Ducal crown. The ribbon is orange yellow, watered, and with three dark green stripes. 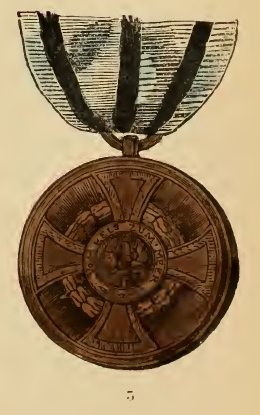 The Knights Grand Cross wear the decoration on the left side, and the jewel across the right shoulder towards the left hip, suspended by a ribbon about three and a quarter inches wide.

The Knights with the star, wear the decoration as before, and the jewel round the neck suspended by a ribbon about two inches and a half wide.

The Commanders wear the jewel (without the star) as above, while the simple Knights wear it at the button-hole by a ribbon of about one and a half inches wide.

In February, 1850, two decorations were founded for the contingent of the German Bund in that Duchy. The first is for officers, and others of the same rank, belonging to that contingent, as a reward for long and faithful service, (fifteen years' service under the Dutch flag entitles to the decoration). It consists of a cross, containing on the obverse the initial of the King, and on the reverse the arms of the Grand Duchy ; it is worn suspended by an orange-coloured ribbon (No. 1).

The second is for sub-officers and soldiers of the German contingent, equally for long and faithful service. It consists for ten years' service of a bronze cross, with the royal initial on the front, and the Grand Ducal arms on the reverse; for twenty years' service, of a similar medal in silver, (No. 2). It is worn by an orange coloured ribbon with green borders.